HELIOS, a new project to foster the social inclusion of NEETs and women 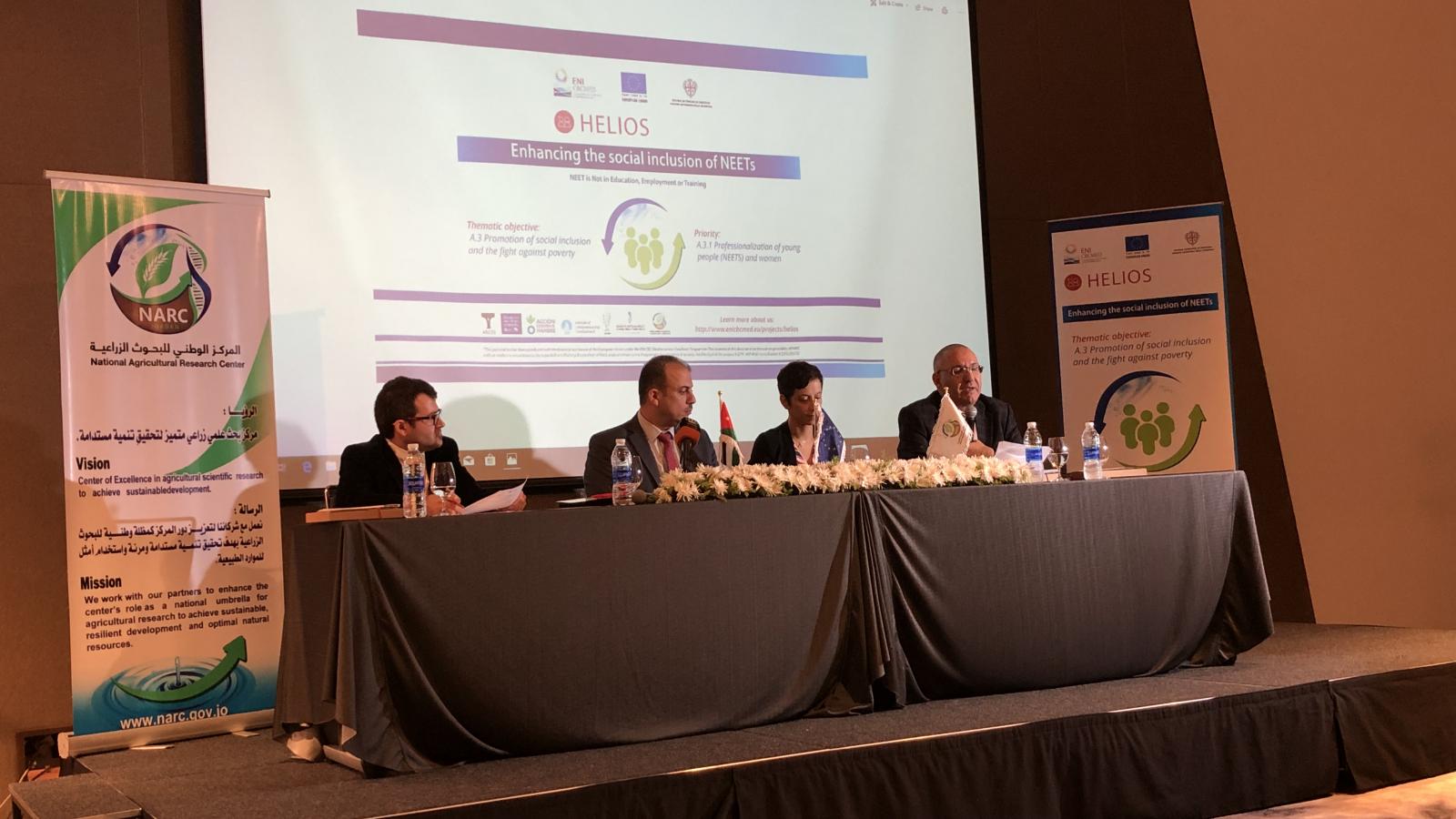 ​The kick-off meeting of the HELIOS “Enhancing the Social Inclusion of Neets” project was successfully held in Amman (Jordan) from 2nd to 3rd of December 2019.

HELIOS is one of the 41 Cross-Border Cooperation projects implemented by the European Union in the framework of the ENI CBC Med 2014-2020 Programme. The project pursues the objective of promoting the development of marketable skills of young NEETs* (up to 30 years of age) and women (without age limits), to meet the needs of Blue and Circular Economy sectors.

The meeting saw the particiption of all project partners coming from Italy, Spain, Greece, Palestine, Tunisia and Jordan as well as several local and regional authorities.

Dr. Nizar Haddad, General Director of the National Agricultural Research Center of Jordan (NARC) was in charge of opening the kick off meeting by giving a warm welcome to all attendees and introducing the Ambassador of the European Union to Jordan (H.E. Mrs. Maria Hadjitheodosiou), the Coordinator of Eastern Mediterranean Branch Office, ENI CBC MED Programme (Dr. Esmat Al Karadsheh) and the Project coordinator and Head of the Unit European Programmes of ARCES Association (Mr. Alessandro Pernice).

This first meeting represented a great opportunity for the seven project partners to discuss the current challenges that different regions on the two sides of the Mediterranean are facing and to raise awareness about the importance of addressing jointly the issues of social exclusion and climate change.

H.E. Mrs. Hadjitheodosiou highlighted the importance of bringing together the two shores of the Mediterranean and joining efforts to support social inclusion and help growth in each participating country.

The General Director of NARC, Dr. Nizar Haddad specified that “projects, like HELIOS, are essential to maintaining the Mediterranean region's prosperity and stability as well as the smooth and sustained implementation of the principle of “one labour market” where labour is homogeneous, job opportunities are accessible more easily to NEETs and women and not only through personal networks, skills are marketable within the whole Mediterranean economy.”

Dr. Esmat AlKaradsheh, the Coordinator of Eastern Mediterranean Branch Office of the ENI CBC MED Programme, emphasized the importance of public-private partnerships in meeting sustainability goals, through the innovative projects co-funded by ENI CBC Med Programme fostering social inclusion in the labour market of marginalized groups such as NEETs and the role of women in economic and social life. In particular, HELIOS project aims to train 1,700 NEETs in the Mediterranean Basin countries that will have the opportunity to be placed in companies for short periods of time.

Mr. Alessandro Pernice, representing ARCES Association (Lead Partner) stated that project partners intend to create a scientific committee where each partner will delegate a technical representative to support the implementation phase and to ensure that there will be two training courses each year in each country. Therefore, the goal is to create six courses in each of the six participating countries where twenty NEETs in each course will get the necessary knowledge to enter into the labour market.

Ultimately, during the conference, project partners had the chance to start planning the next phase of the project activities and they also joined forces to identify the best policies to fight poverty, inequality and social exclusion.

* Young people Neither in Employment nor in Education or Training