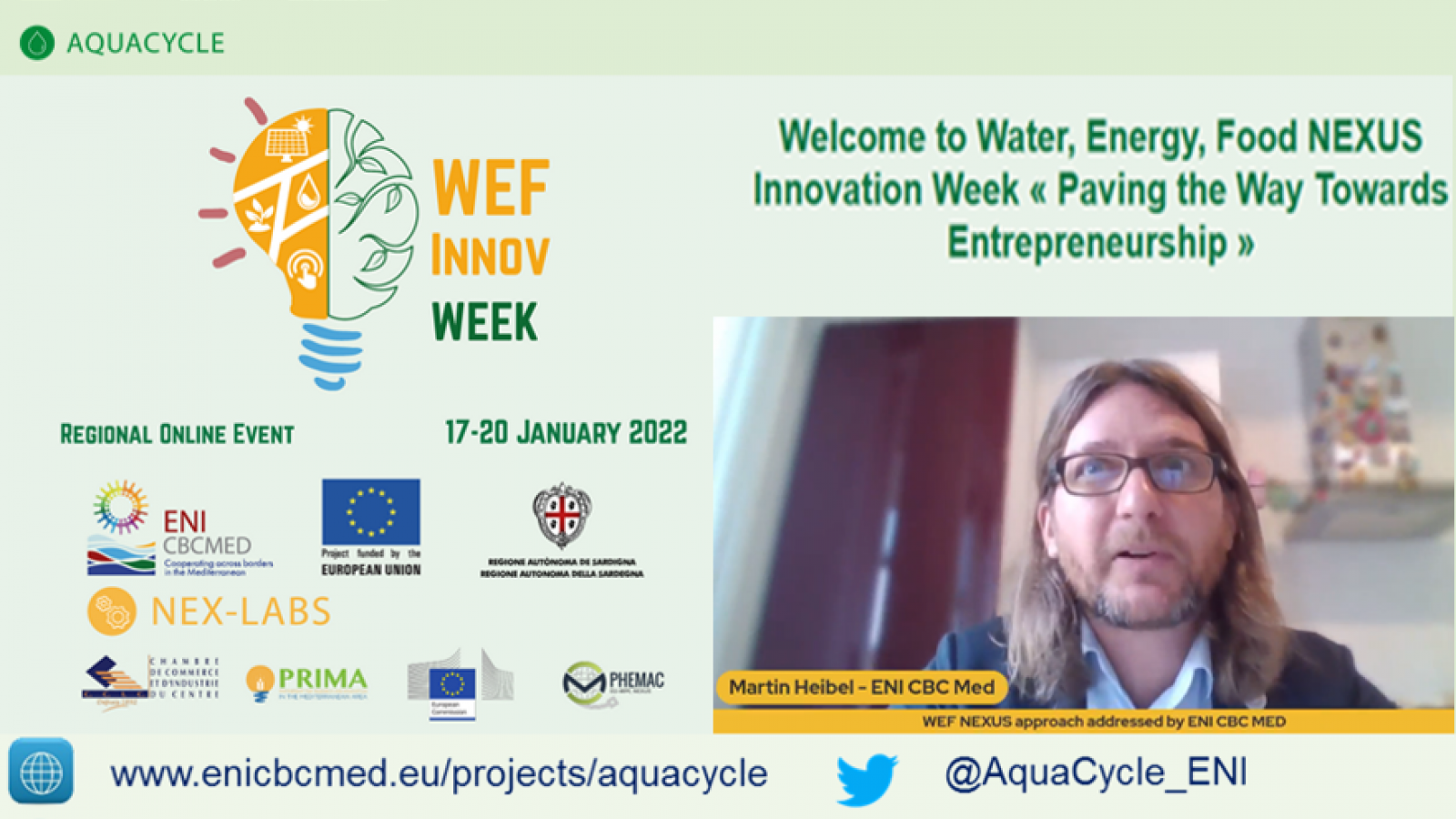 In his address to the Water-Energy-Food Nexus Innovation Week, Mr Martin Heibel, Communication Manager with the Managing Authority of the ENI CBC Med Programme, reiterated on today’s challenges faced in the Mediterranean Region to achieve the sustainable management of water, energy and agro-food systems.

It is not a secret that the Mediterranean Region is a climate change hot spot.

Martin described the ENI CBC Med Programme as a huge platform for cooperation that is currently accessible to organizations in 13 partner countries from both the northern side and the southern side of the Mediterranean basin.

Cooperation is the DNA of the ENI CBC Med Programme.

The ENI CBC Med Programme currently has a budget of 209 million Euro, which is a lot, but it is nothing compared to the magnitude of the challenges that need to be addressed!

Martin emphasized that the ENI CBC Med Programme cannot by itself solve the problems, but – through the projects which receive funding – can devise tangible and practical solutions which could then be replicated by local communities, national entities as well as taken up by the private sector. The programme currently supports 80 projects which involve 600 organizations, both from the public and private sectors, as well as industry.

The philosophy of the ENI CBC Med Programme is not focusing on a north-south transfer of knowledge but rather on exploiting the full potential of cooperation, by sharing knowledge and expertise that is held by all the actors in the Mediterranean Partner Countries.

The ENI CBC Med Programme was established in 2007 and is currently in its second edition. All is in place to set in motion a third edition with a horizon of 2027, with new calls for proposals and a probably larger budget. The current list of partner countries include Cyprus, Egypt, France, Greece, Israel, Italy, Jordan, Lebanon, Malta, Palestine, Portugal, Spain and Tunisia. The third edition looks forward to welcome Algeria and Turkey.

The new edition of the programme will be tied to the principles of the European Union’s Cohesion Policy, and retitled as the Interreg NEXT Med Programme.

Women and youth are identified as the most vulnerable groups among civil society, and therefore merit special attention. A further strong emphasis is given to communication on project outcomes to key stakeholders, particularly through online means. This in turn leads to more visibility of the practical solutions and best practices that are being developed through the funded projects.

The Water Energy Food Nexus Innovation Week runs from January 17 through January 20, from 9:00 am until 15 pm.  Registration to the regional online event is free of charge.

We look forward to meet up in the AQUACYCLE booth at the Water Energy Nexus Innovation Week!