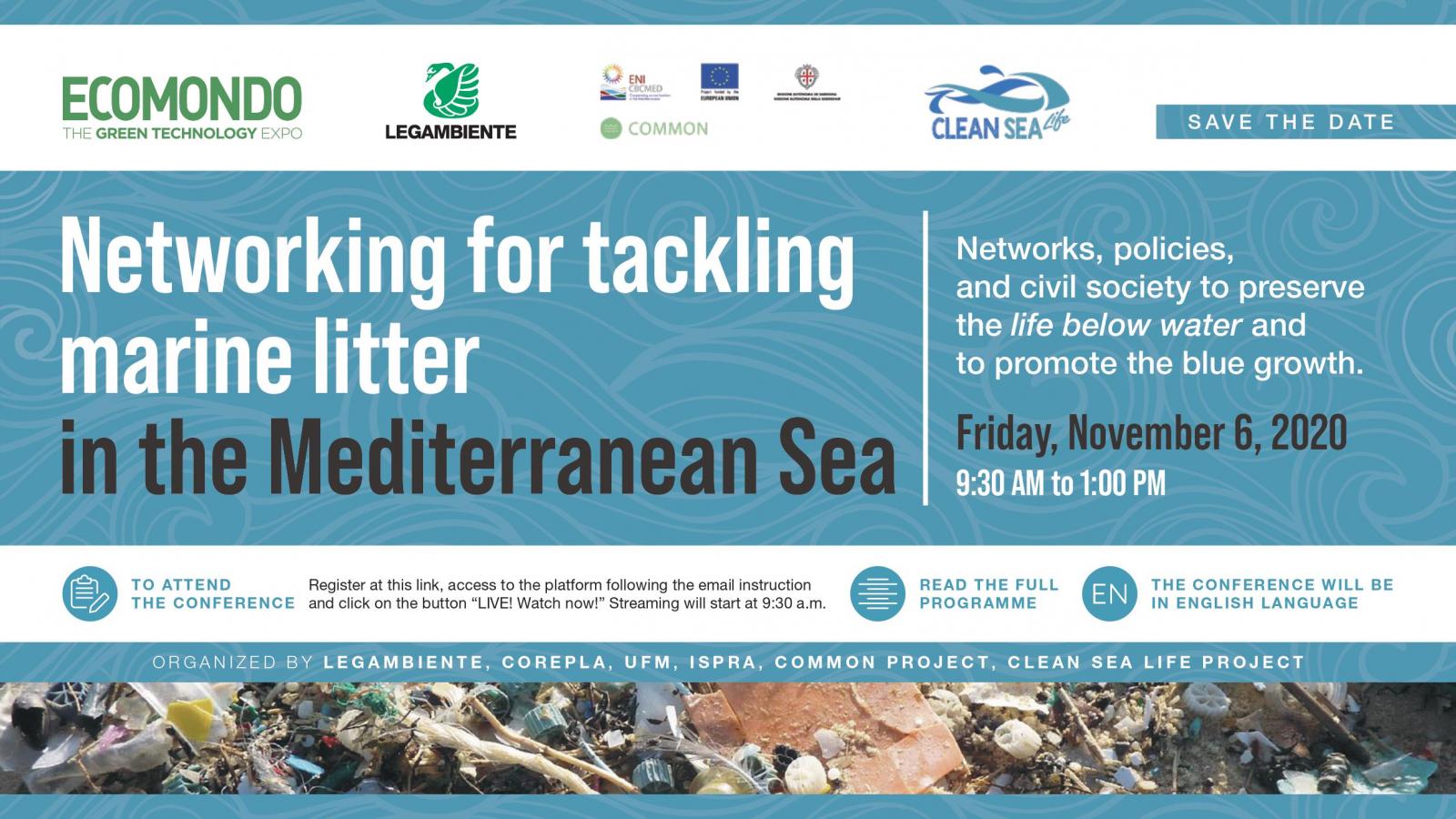 A united Mediterranean is needed to reduce marine litter. Not only in the practices of correct waste management and disposal, but also and above all in the policies to be adopted, networking and also replicating the good networking practices already in place. This is the message that Legambiente is launching today at the online conference "Networking for tackling marine litter in the Mediterranean Sea" organized together with the Scientific Technical Committee Ecomondo, Corepla, Union for Mediterranean, Ispra, Common and Clean Sea Life within the 24th edition of Ecomondo, this year in a totally digital formula. A moment of reflection to shed light on the problem of waste at sea throughout the Mediterranean basin and to discuss the proposals and policies to be implemented, both at European and international level, also starting from concrete examples such as the networking model started with the COMMON project (Coastal Management and MONitoring Network for tackilng marine litter in the Mediterranean Sea - funded by the European Union under the ENI CBC Med programme) which involves over 500 subjects, including institutions, organizations, associations, municipalities and cooperatives, to promote models of common governance in the countries involved: Italy, Lebanon and Tunisia. Or the historical experience of the Clean Up the Med campaign which in 28 years has mobilized over 500,000 volunteers from 23 different Mediterranean countries and thanks to which 100,000 kilometers of beach have been cleaned of over 800,000 tons of waste. And the great mobilization put in place by the Clean Sea LIFE project that in Italy, in four years, has given life to a unique community involving divers, boaters, fishermen, students and citizens in beach cleaning and information and awareness raising activities.

Experiences that deserve to be replicated and that demonstrate how networking can be a precious ally in the fight against marine litter, but in addition to this transversal commitment for Legambiente it is essential to implement a unitary policy against marine litter starting from an update on proposals from Unep and the European Union, extending the European guidelines to the whole Mediterranean basin. Furthermore, on the Italian political front, it is urgent to approve as soon as possible the Salvamare law, blocked for months in the Senate and the Italian implementation of the European Directive to ban and reduce the production of disposable plastic products throughout the national territory, before of the deadline of July 2021.

"The 80% of the waste beached and monitored on Italian beaches is plastic, and, unfortunately, the one present on our coasts is only the tip of the iceberg of a much wider phenomenon, that of the marine litter, which is endangering also the Mediterranean Sea, its biodiversity, but also the local economy. To counteract the marine litter - declares Giorgio Zampetti, director of Legambiente - it is necessary to act as soon as possible and in synergy through greater networking actions, information and awareness campaigns, increasingly promoting the circular economy, working to reduce pollution from plastic and putting in place ad hoc policies starting from a unitary policy. There is no more time to waste. To date, the approval in the Senate of the European delegation law represents an important first step forward against disposable plastics and waste at sea. We are on the right path: this is why we hope that Italy will implement the European Directive as soon as possible and that the Senate will do the same for the approval of the Salvamare Law, blocked for months at Palazzo Madama, and which would allow fishermen to bring back to land the waste accidentally caught ".

Networking experiences - According to the World Union for the Conservation of Nature (IUCN) (Report Mare Plasticum: The Mediterranean) over 230 thousand tons of plastic are dumped every year in the Mediterranean Sea. Worrying data, that once again indicate the seriousness of the problem, which is why it is essential to create a network to reduce the marine litter as the European project COMMON is doing, which during the first year of life created a network of over 500 subjects, including institutions, entities, associations, municipalities and cooperatives, to promote common governance models in the countries involved: Italy, Lebanon and Tunisia. The network is made up of 70 government authorities, between municipalities and provinces and members of national governments, 60 environmental associations, 200 tourist, seaside, cultural and cooperative associations, 43 proloco, 40 schools, 10 universities, 35 tourist ports, 40 commercial associations and dozens of tourist areas, parks and protected areas. The network will soon be joined by about 30 Sea Turtle Rescue Centres disseminated in the Mediterranean area and dedicated not only to the protection of the species, but also to the care of the specimens and the analysis of the main threats that sea turtles face, such as bycatch or ingestion of plastic. COMMON will coordinate a permanent network that will unite under the same leadership many of the rescue centres working in the three countries involved. In addition, thanks to the collaboration with the University of Siena, the University of Sousse and the Tyre Nature Coast Reserve, five rescue centres are already engaged in sampling the species hosted, currently about a hundred. The goal is to quantify the presence of waste and microplastics ingested by hospitalized specimens.

"The COMMON project - adds Zampetti - has strengthened the link with the southern Mediterranean countries and is creating a network of great value to design management interventions extended to the whole area, in order to reduce the problem of waste at sea, including through integrated governance models. A model that should also be supported by common policies of sustainable production and consumption because the different regulations among the Mediterranean countries represent an obstacle to environmental sustainability. The extension of European policies and guidelines to the entire basin can represent a great development opportunity with significant environmental, social and economic impacts ".

Among the other actions implemented by the COMMON project there is also the BEach CLEAN campaign, which involved over 100 Italian, Lebanese and Tunisian bathing establishments with a high tourist influx during the last summer season. Each structure has affixed a decalogue of good practices, to inform tourists on the possibility of reducing marine litter through a few good habits, and has monitored the health of the beaches involved: the most found material on the Italian, Lebanese and Tunisian shores examined throughout the season is, as usual, plastic (80%), followed by paper (13%) and glass (4%), the rest (3%) is mixed material. The 87% of the structures involved also report the discovery of cigarette butts and disposable plastics: caps, glasses and straws.

In addition to COMMON, among other good networking practices, Legambiente also recalls Clean Up The Med, an environmental volunteer campaign organized by the environmental association and which, in 28 years, has mobilized a total of over 500 thousand volunteers from Italy, Albania, Algeria, Croatia , Republic of Macedonia of the Nord, Jordan, Turkey, Tunisia, Lebanon, Libya, Palestinian Territories, Israel, Greece, Cyprus, Spain, France, Montenegro, Portugal, Morocco, Egypt, Montenegro, and - in times of peace - even Syria. And then Clean Sea LIFE, the European project on marine litter led by the Asinara National Park and co-financed by the European Commission as part of the LIFE programme, now in the process of being closed, which has made it possible to involve over 25,000 Italians in four years in extraordinary cleaning activities of Italian coasts and sea beds and to create a community of divers, boaters, fishermen, students and citizens. Furthermore, four municipalities, thanks to Clean Sea LIFE, have adopted permanent initiatives to combat marine litter: Maruggio, Giovinazzo and Bitonto by prohibiting the massive launch of balloons and San Benedetto del Tronto by disposing of waste collected in the sea by fishermen.