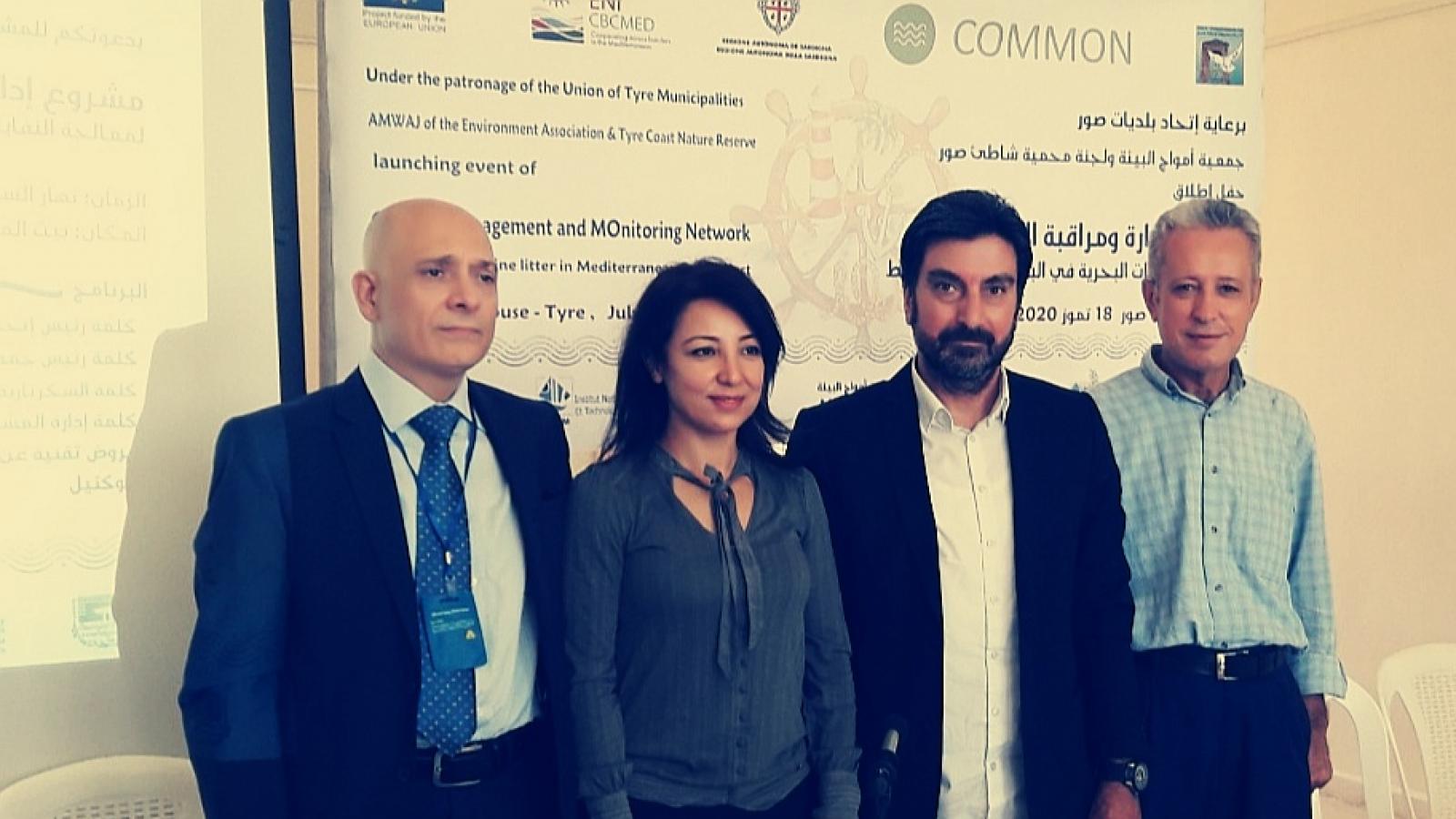 Launched on July 18, 2020 at Beit Al Mamlouk, Tyre, the COMMON project (COastal Management and MOnitoring Network for tackling marine litter in Mediterranean Sea), a European project which aims at building a collaboration network between Italy, Tunisia and Lebanon, to support a correct management of Marine Litter. The waste of sea has become a serious concern in the Mediterranean basin, which calls the need for a collective response with an integrated approach, in which the various political actors and civil society can work together and in a coordinated way.

“On average, waste generation in Lebanon is estimated at 481 kg per capita every year, which is considered high in comparison with countries with similar economies. This amounts to 6,555 tons of municipal solid wastes daily”, says Nahed Msayleb, Director of Tyre Coast Nature Reserve (TCNR) and project manager at TCNR. “85% of solid wastes get disposed-off in landfills without any treatment or sorting, some of which are marine. Recent studies showed that 80% of marine litter in Lebanon is composed of plastic, which requires 1000 years to fully decompose, making it the most dangerous litter type on marine biodiversity, with 124,000kg daily disposed-off inadequately. Moreover, the Lebanese shoreline is under huge litter pressure generated from dumpsters on the coastal line, rubbles generated from public construction projects, domestic/Municipal Wastewaters and Factories’ flows that get injected in the sea. So, there is the need to projects like COMMON, to tackle the waste problem in an integrated and coordinated way”.

The event has presented by Eng. Hasan Dbouk (TCNR committee president, President of the Union of Tyr Municipalities), Mr. Malek Ghandour (AMWAJ President), Dr. Fadi Karam (JTS officer – Lebanon), Mr. Hisham Abou Jaoude (TE COMMON-AMWAJ) and Dr. Nahed Msayleb (PM COMMON- TCNR), in the presence of different stakeholders, municipalities, journalists and citizens. Tyre Coast that extends from Litani River estuary (Al Qasimiye) to Ras Al Ain is one of the five pilot areas of the project, where awareness campaigns and monitoring activities will take place, both to study the issue and to preserve the environment.

Mr. Malek Ghandour, president of AMWAJ described the situation at the pilot area:“Tyre, is a historical peninsula listed on the World Heritage List, and located in the middle of the pilot area chosen for the implementation of the project on the coast of South Lebanon that extends from Litani River estuary (Al Qasimiye), to Ras Al Bayada. This coast is distinguished by the sandy beach, the agricultural lands for citrus, bananas, vegetables, trade ports, fishermen, natural springs, marine fountains, and marine turtle nesting sites. All these characteristics prompted to work on issuing Tyre Coast Nature Reserve law (South of Tyre - 1998) and the Abbasiye Coast Reserve law (North of Tyre - 2020) for an integrated management of the Lebanese coast in partnership with governmental and non-governmental sectors and municipalities, on announcing and managing marine reserves for important sites for protection, and supporting local communities through improving livelihood and economic resources and involving  them in the protection and management of resources in a balanced and sustainable way”.