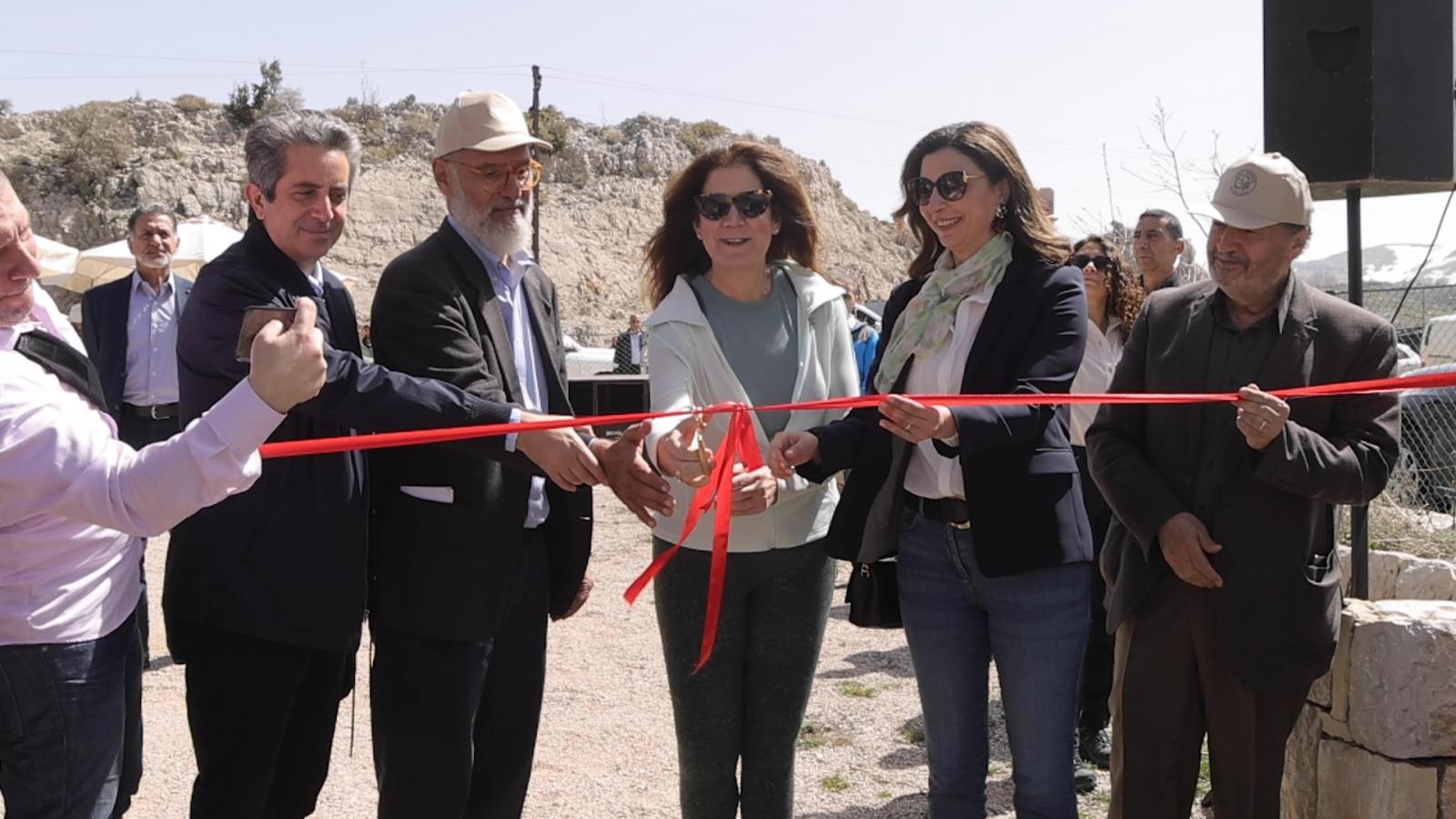 As a result of the significant work progress since the initiation of the CROSSDEV and Ambassadors Fund for Cultural Preservation (AFCP) projects in Jabal Moussa Biosphere Reserve (Lebanon), the Association for the Protection of Jabal Moussa (APJM) organized on Monday April 11th, 2022, a cultural event celebrating the launching of the visitors center “High Mountain Phoenician Center” as part of the CROSSDEV project funded by the EU within the ENI CBC MED Programme, within the context of the Phoenicians' Route certified by the Council of Europe, as well as the closing of the Hinterland Archaeological Heritage project, funded by the U.S. AFCP.

The event took place in the presence of the representative of the Lebanese Minister of Culture Judge Maya Kanaan, the U.S. Ambassador to Lebanon Ms. Dorothy C. Shea, the Honorary president of the Phoenician’s Route Prof. Rachid Chamoun, the Mayor of Yahchouch Mr. Karl Zouein, the Head of Department of Youth and Local Bodies at the Ministry of Tourism  Ms. Petra Obeid,  the Head of Department of Ecosystems at the Ministry of Environment Ms. Lara Samaha, Archaeologist Dr. Stephen McPhillips, Architect Dr. Hany Kahwaji Janho, and interested people and experts.

At the welcoming in Qehmez entrance, the CROSSDEV project manager Ms. Joelle Barakat introduced both CROSSDEV and AFCP projects and how they contribute to the conservation of cultural heritage as well as local development through tourism in Jabal Moussa and the valley of Adonis.

Then, the attendees followed Ms. Joelle Barakat and Ms. Lara Atallah, the CROSSDEV eco-tourism coordinator, on a tour exhibiting the outputs of the projects: pioneer research in hinterland archaeology, enlisting and conservation of new sites by the Ministry of Culture, rehabilitation of historical sites and archaeological collections, training of local guides, enhancement of the infrastructure of trails, support to local guesthouses and publishing the new Tabsoun book.

With great enthusiasm, APJM team also announced the launching of Jabal Moussa's mobile application that will provide information on ecotourism in Jabal Moussa to visitors and details on the heritage they encounter while hiking, through a link with QR code panels installed on the trails. 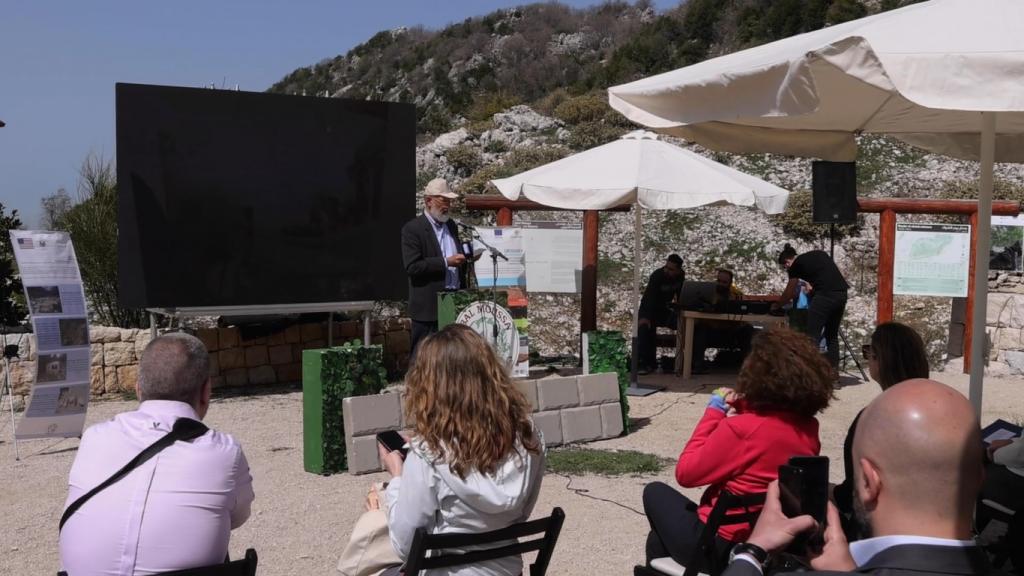 Afterwards, Mr. Pierre Doumet, APJM President, welcomed the guests stressing that the Man and Biosphere program places the human being, and not the monument, at the center of the conservation.

By allowing us to proudly showcase our Byut Village and Roman stairs to locals and foreign visitors alike, while carefully conserving and protecting these monuments, we are breathing at least a bit of life into the local economy, through sustainable socio-economic activities such as ecotourism which benefit, among others, the most vulnerable strata of society, women and youth.
Mr. Pierre Doumet
APJM President 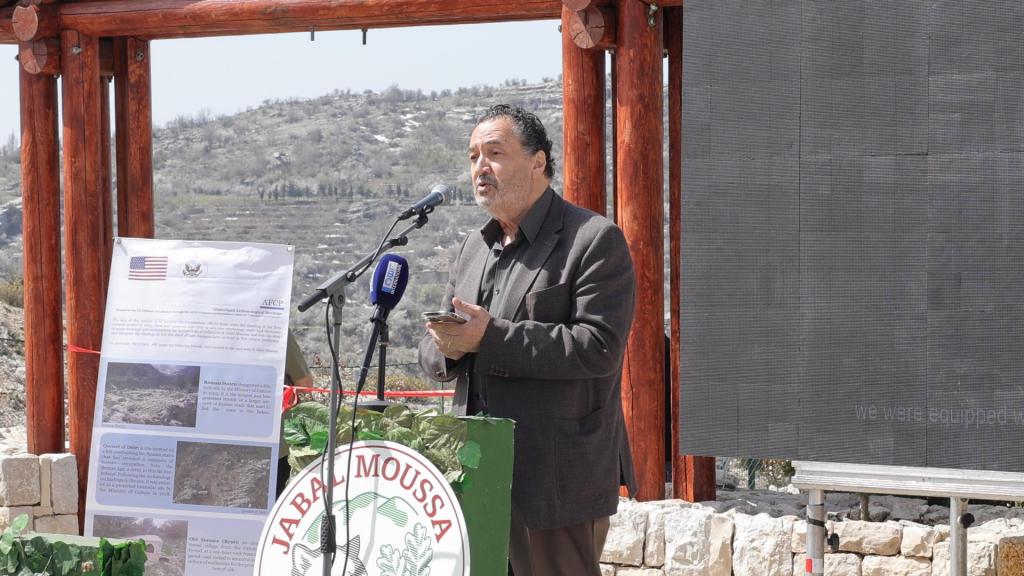 Next, Prof. Rachid Chamoun, asserted his support for the launching of the “High Mountain Phoenician center” in Jabal Moussa, as part of the Phoenicians’ Route, “La Rotta Dei Fenici”. In this context, he proudly shared the news that, following all the efforts done with the Ministry of Tourism, Lebanon has recently joined the Enlarged Partial Agreement on Cultural Routes of the Council of Europe.

The closing speech was addressed by the U.S. Ambassador to Lebanon, in which she expressed a feeling of homecoming since her first walk ever in Lebanon and many afterwards were in Jabal Moussa.

This project, among many that have been funded at this site, focuses on conserving, studying, and showcasing the archaeological collection of Jabal Moussa while connecting the various archaeological sites of the biosphere reserve to one another.  The biosphere component of this project is extremely noteworthy—not only are we highlighting this beautiful natural heritage location, but we are also protecting, studying, and documenting the trees, plants, and animals that make this location so unique.
H.E. Ms. Dorothy C. Shea
the U.S. Ambassador to Lebanon

H.E. Ms. Dorothy Shea was then invited to cut the ribbon to officially inaugurate of the cultural detour and the rehabilitated cultural sites, hand in hand with Judge Maya Kanaan, Prof. Rachid Chamoun, Mr. Karl Zouein, and Mr. Pierre Doumet.

After, the attendees were delighted to hear the testimonials of two local women, Ms. Rita Keyrouz and Ms. Roula Souaid, who proudly described their work related to tourism and agro-food production in Jabal Moussa, and how the CROSSDEV project allowed to enhance it.

In collaboration with Jabal Moussa, I am able to showcase the culinary heritage, from my mother and grandmother, to visitors of the reserve (such as “reshta be adas”) who can also experience the rural lifestyle while staying in my B&B in Al Iibri village. Within the CROSSDEV project, I got to meet and connect with other B&B and guesthouse owners, attend food and safety sessions, receive experts helping me strengthen my skills. Recently, I received a grant to refurbish my house to enhance the visitors’ experience.
Rita Keyrouz
owner of a guesthouse in Al Iibri village

I am growing as the association grows. At first, I was a part of the team of women responsible of the food production in the Kitchen. Then, after following training sessions with a food expert within CROSSDEV, I was selected to be the kitchen supervisor. I am also in charge of the budding botanist center. My involvement in Jabal Moussa, made me grow in many aspects, I am now more knowledgeable in several fields such as food safety, plant growing, seeds treatment…
Roula Souaid
responsible of APJM central kitchen and the budding botanist center

Later, the participants walked towards the site where the planned “High Mountain Phoenician Center” will be established.

Dr. Hani Kahwaji Janho, the architect, explained how in his concept the volume blends in the surrounding landscape consisting of an abandoned quarry, based on a design inspired by the rock hyrax and the Roman Stairs. Thus, minimizing the visual impact of the construction.

The concept and the design are inspired by Tabsoun, the rock hyrax, and its behavior: small and hidden, compact volume with short legs, integrated habitat in the rocks.
Dr. Hani Kahwaji Janho
architect of the High Mountain Phoenician Center 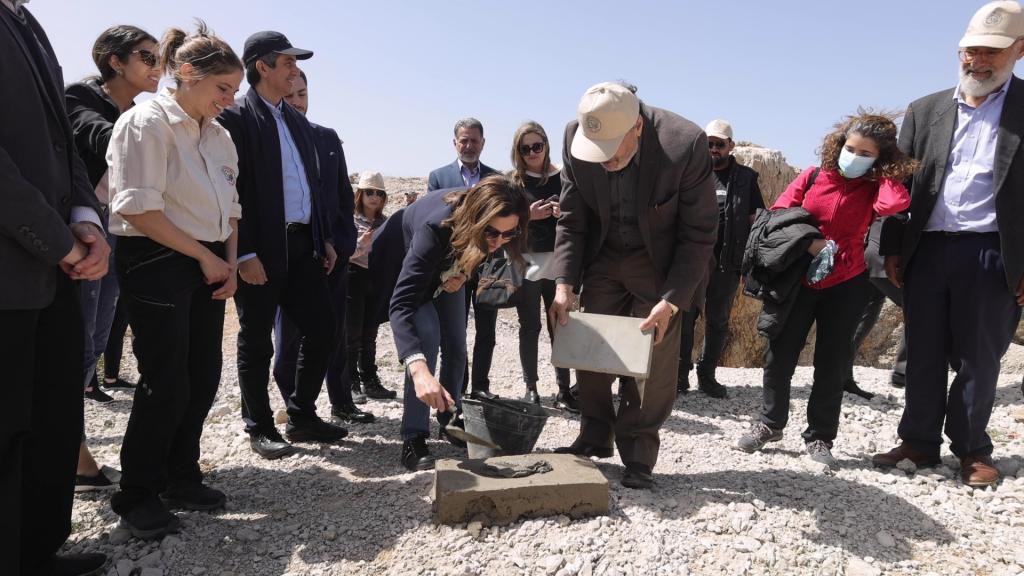 The explanation was followed by the laying of the foundation stone by Judge Maya Kanaan and Prof. Rachid Chamoun.

Finally, the guests returned to the entrance and enjoyed delicious bites prepared by local women from the surrounding villages.