This article was published on L’Orient-Le Jour on October 3rd. Translated for CROSSDEV by Rhéa Hleihel. Click here to read the original version, in French.

Jabal Moussa is the “Travelers’ Choice”

With an exceptional natural and cultural heritage, Jabal Moussa adds a new prize to its records, a distinction that rewards its warm and professional hospitality towards visitors.

The magnificent site of Chouwan, very popular among visitors.

Jabal Moussa in the Kesrouan region, acclaimed as a protected area in Lebanon, has recently won Tripadvisor’s “2020 Travelers’ Choice”. The famous website ranks it among the top 10% of “the most attractive places in the world to visit in 2020.” This ranking “is based on feedback from visitors, whose comments weighed largely in favor of the quality of the site’s hospitality,” explained Pierre Doumet, founder of the Association for the Protection of Jabal Moussa (APJM). Doumet believes that this new award is largely due to the exceptional and diversified beauty of the place, combined with the local population’s involvement, running guest houses and selling home-made food products and artifacts. “Local development is ongoing, except it is a traditional development that respects the local culture,” he adds.

Jabal Moussa, a privately protected area classified as a “natural site” in Lebanon, is designated a UNESCO Biosphere Reserve since 2009. It includes numerous hiking trails and has welcomed, in recent years, tens of thousands of visitors per year. This “Travelers’ Choice” crowns years of hard work, “which will become even more visible later, when constraints due to the coronavirus are no longer enforced,” according to Joëlle Barakat, Conservation Manager. This year, the reserve remained open, welcoming small groups by appointment in order to avoid large gatherings.

According to Ms. Barakat, this distinction rewards “the enthusiastic commitment of the staff composed in its majority of inhabitants of the region.” To its visitors, the reserve offers enchanting and contrasting landscapes and henceforth “what is known as the Mountain Full Loop, which includes all the trails, and can be completed in a day or two,” reveals Joëlle Barakat. “The all-courageous hikers who successfully complete the loop will be awarded a certificate,” she adds.

Jabal Moussa is above all a paradise of flora, home to more than 700 species, some of which are endemic to the site. Among the numerous animal species, is the Rock Hyrax (French: Daman des rochers), a small furry brown mammal thought to be extinct in Lebanon and that reappeared in the reserve. The rock hyrax inspired the book series “The Adventures of Tabsoun” (the name of the rock hyrax in local Arabic), of which the third volume has just been published, and is dedicated to the cultural heritage of Jabal Moussa. 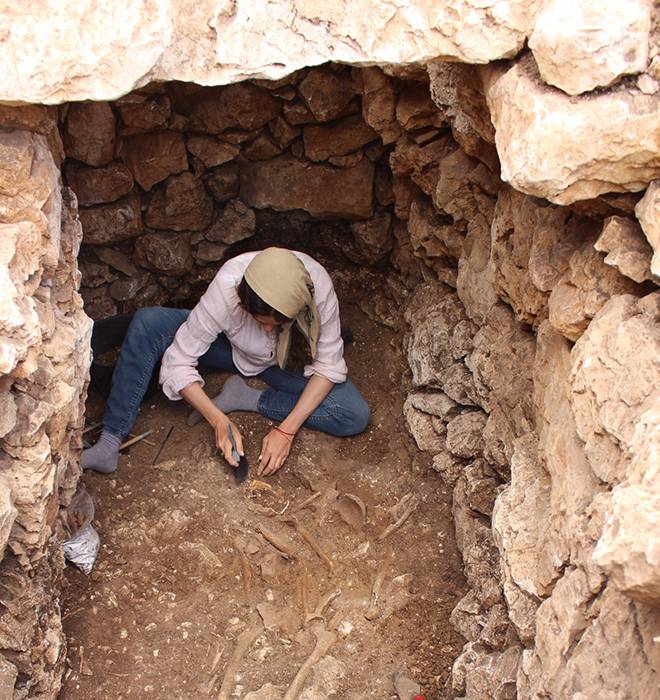 An industry of the Romano-Byzantine period

Jabal Moussa’s extraordinary biodiversity is not the only treasure of the reserve. Its considerable cultural and archaeological heritage covers periods ranging from the Middle Bronze Age to more recent times, such as the Crusaders’, as Bettina Genz, archaeologist coordinating the work at Jabal Moussa and lecturer at AUB, points out. “This year, we uncovered two industrial installations dating from the Romano-Byzantine period. According to one theory,” she elaborates, “these sites could have been devoted to lime production.” The archaeologist explains that traces of industrial production and inhabited villages dating as far back as 3,500 to 4,000 years were found in the region.

“Although the area is somewhat limited, it must have been home to thriving production and trade to and from the coast,” she explains. “Products have probably been manufactured from forest resources.” She underlines the rarity of excavations in the mountains, especially in mountainous forests, hence the importance of such discoveries. “They allow us to understand the economic system that was in place in the mountains throughout the ages,” she adds.

The two recently excavated sites are close to the so-called Roman road, although it is a path used by man in earlier times, linking this region to the Bekaa on one side and to the Mediterranean coast on the other. The archaeological excavations are carried out within the framework of the CROSSDEV project, funded by the European Union. Another project consists of the cleaning and rehabilitation of the Roman Stairs, funded by AFCP (Ambassadors Fund for Cultural Preservation) through the U.S. Embassy.

Through activities highlighting the Jabal’s cultural and natural heritage, the management of the reserve has blended into its social fabric, which includes several villages. In spite of the jobs created over the years, the site’s conservation cause did not convince some inhabitants who have another conception of the resources exploitation. “Abuses abound, ranging from the illegal logging of trees to the exploitation of quarries,” deplores Pierre Doumet.

Has the idea of conservation reached a growing number of inhabitants? Roula Abi Habib Khoury, Professor of Sociology at Saint-Joseph University, was solicited to conduct a survey of the villages’ inhabitants of the region in 2009-2010. Ten years later, it’s time for an update, and results will be published shortly. “A change is noticed, however, we still need to further analyze the results of our survey for better precision,” she says. “The association is now seen as a potential employer and an important economic player. It should be noted, however, that a certain percentage of residents would still be hostile to the conservation approach.”

Since local involvement is crucial to the long-term protection of the site, the survey conducted in 2009-2010 represented an essential step in the work of APJM. “This report demonstrated the complex relationship between the inhabitants and nature,” explains Khoury. “Inhabitants were more or less in line with the logic of the ecology of conquest, as nature represents both a source of income and anguish (due to the presence of wild animals in particular). An association that is part of a conservation framework was frowned upon by some. It was necessary to show them that conservation is in their best interest, as it represents an option for sustainable use of resources.”