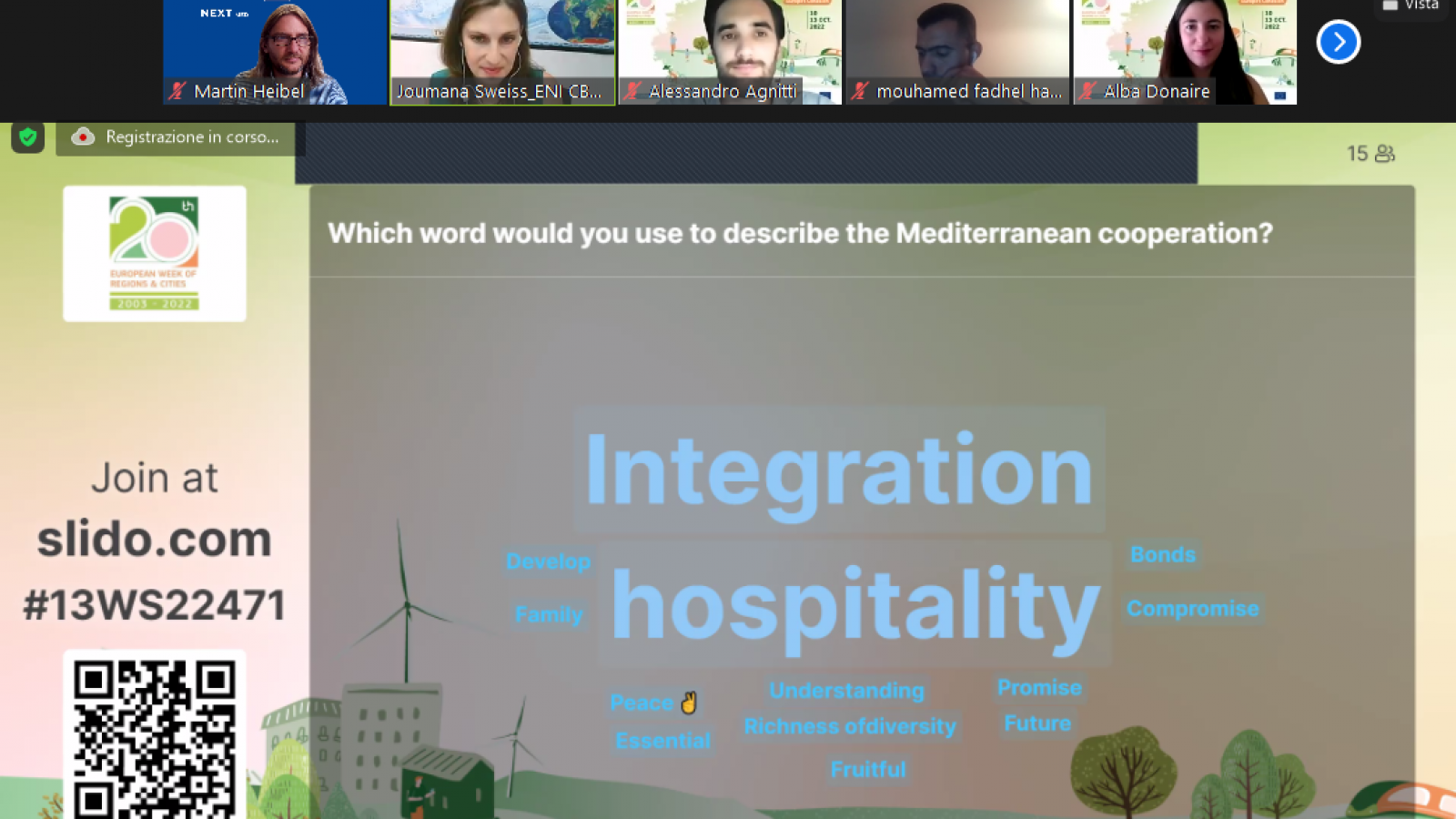 In the framework of the European Week for Regions and Cities and seizing the opportunity of the European Year of Youth, the ENI CBC MED programme organised on the 13th of October 2022 a debate with 4 young Mediterranean people to exchange ideas and visions about cooperation: What is it based on? What does it bring for young people? What are the main topics on which Mediterranean cooperation should focus on?

What is cooperation about?

Cooperation is based on human interactions and even if during the last 2 years, people had to adapt and get to work with people from different countries and cultures through on-line meetings, using IT tools, cooperation can´t be replaced by machines and artificial intelligence. This is one of the first messages shared by Nada El Sharkawy, a young Egyptian lady from Alexandria, who works as project manager for different ENI CBC MED projects at the Confederation of Egyptian European Business Associations.

Cooperation is based on human connections so it can´t be replaced by machines and artificial intelligence.
Nada El Sharkawy

What does cooperation bring for young people?

When you live experiences in new contexts with people from various backgrounds, you leave your comfort zone. You have no other choice than to take decisions on your own, to explore your weaknesses and your strengths and explore them. You increase your capacity to adapt, and you become more flexible. All this makes you grow and become more mature and independent, and this will definitely help you in both your personal and professional life. That´s what Mouhamed Hamza, a 23-year-old Tunisian man, recently graduated and engineer, had experienced through an exchange in the north of Jordan through RESMYLE project.

Alba Luz Donaire, a Spanish lady involved as project manager in InnovAgroWoMed at the NGO Jovesolides that deals with empowering Mediterranean women in rural areas, focused her message on the idea of recognition. For her, this type of cooperation among women from Italy, Palestine, Spain and Tunisia is a double act of recognition. First, to recognise our common history and then to recognise that we are building a new story through this cooperation, far away from the main discourse of the media.

This type of cooperation based on human interaction is an act of re-cognition about knowing someone first hand, isolated from the media.
Alba Luz Donaire

What is so special about Mediterranean identity?

According to Alessandro Agnitti, a young Italian student in law and member of the Mediterranean Youth Council, identity is not exclusive and monolith. Through your life, you can change identity, have multiple identities that change with time, space and experiences. He pursues saying that usually when you are abroad, you build your identity by exclusion. In the case of the Mediterranean area, this mechanism does not work with him. What fascinates him the most about the Mediterranean identity, is that despite of thousands of years of empires that rose and fell, despite wars, religion, there is still something that unites Mediterranean people that is stronger than any political or historical event which is the way to see life, the way to live community, the sense of hospitality.

There is still something that unites Mediterranean people that is stronger than any political or historical event which is the way to see life, the way to live community, the sense of hospitality.
Alessandro Agnitti

What are the main topics on which Mediterranean cooperation should focus?

To open the debate with the rest of the participants, the ENI CBC MED staff asked what are the main topics (7) in which Mediterranean cooperation should improve? The ranking obtained showed that climate change and education and training were on the top, followed by human rights, peace and stability, employment and the last two topics were gender equality and health.

All of the speakers were not surprised by these answers while some participants were. How come climate change can go on top of human rights?

Education first and link with the institutions

Alessandro goes a step further while tackling education. He said that what is needed is to implement an adequate system between employment and education. We may have an adequate education but if the economic environment is not open to young people who are educated, the only solution seems to go abroad he added.

Moreover, as a member of the Mediterranean Youth Council, he insisted on the importance to link young people with institutions.

The Mediterranean Youth Council is not just a youth organisation, it wants to be the intermediary between young people and the institutions through a bottom-up approach. He set the example of pollution. This issue requires both education effort (improving programmes in schools) and institutional efforts: ensure the needed infrastructures so people can be respectful with the environment.

Main message to other young people: break the barriers and remove filters

The four speakers emphasized on the importance to be open, to learn every day from every opportunity without prejudices, get to know each other without filters.

Sharing life experiences with people from another country does not only help you grow as an individual, but it also contributes to reinforce relationships between these countries as said Mouhamed.

Cross-border exchanges do not only help you grow as an individual, but it also contributes to reinforce relationships between countries.
Mouhamed Fadel Hamza

To conclude, a word cloud was created and the most frequent words that appear to sum up Mediterranean cooperation was integration and hospitality. With these two words and all these reflections, we closed the session with a positive note and food for thought.

The ENI CBC MED team thanks Nada el Sharkaway, Alessandro Agnitti, Alba Luz Donaire, Mouhamed Fadel Hamza and the over 60 participants who made this debate so inspiring.

For more information about the videos shown during the workshop, here are the links:

Events
Programme
Projects
Back to news