More than 80 persons attended the open dissemination event held on May 11, 2022at the premises of the Regional Center for Research in Horticulture and Organic Agriculture (CRRHAB) in Sousse, Tunisia. Among the attendees were PhD students, professors, researchers, engineers, specialists in plant protection, private plant protection companies, agricultural engineers and technicians from the public agriculture sector and some farmers.

After the welcome of the participants and the official opening of the scientific day by the Deputy Director and the representatives of S.A. (Pr. Mohamed Houssine Othmane, Pr. Mounir Mekki) and the General Director of CRRHAD (Pr.  Messaoued Mars), the official beginning of the οpen dissemination event was launched in which five scientific conferences are scheduled and presented in the conference room of the Higher Agronomic Institute to gather the maximum of people especially specialists and  to guarantee the good success of that scientific day. 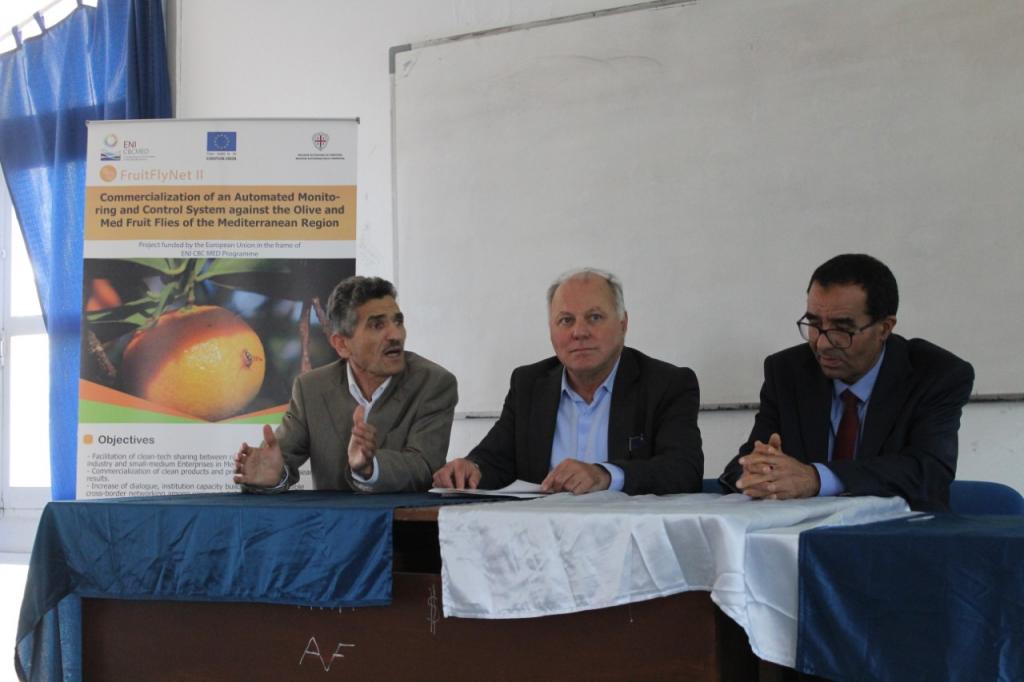 A  sheet of questions to be answered was distributed to participants to collect information on some aspects of the MedFlyand Olive fly infestations and control (for example : (1) the economic loss from olive fly or Medfly pest damages, (2) in your opinion the FruitFlyNet-ii will improve pest control efficacy in practice?, (3) do you believe that the outputs of the FruitFlyNet-ii will offer valuable tools for pest control not available yet in the market, (4) do you think that you would like to apply the system in your orchard when it will be commercially available?).

The first presentation was provided by Theodore Tsiligiridis,  Professor of Informatics at the Agricultural University of Athens (Greece), Coordinator of the Project FruiFlynet ii and  entitled “The FruitFlyNet-ii project: An overview”. He presented the FruitFlyNet-ii project supported by ENI CBC MED programme  and emphasized on the strategy to be followed to control  the two key pest: the Olive fruit Fly, Bactrocera oleae on olives and the MedFy, Ceratitis capitata on peach and citrus in the Mediterranean. He specified that the FruitFlyNet-ii project aims to develop a complete package solution of e-trapping and a set of services for the farmers to monitor these two harmful pests.

The second lecture was delivered by Dionyssios Perdikis, Professor of Entomology at the Agricultural University of Athens in Greece entitled  “The decision and spraying process of the OliveFlyNet”  in which he detailed  the current control of the Olive fruit fly, Bactrocera oleae in the Mediterranean and Integrated Pest control Scenario, the monitoring of the Olive fruit fly using different kind of traps and attractants, how to make spray-decision according to trap capture and spray applications. He explained why the traditional control of pests is limited because of big delays in field data collection, low accuracy in the collected field data, the empirical approaches in decision making – calendar sprayings, no effective Integrated Pest Management (IPM), and no traceability regarding spraying. He then introduced the new solutions suggested by the Project integrating Location Aware System (LAS) solutions and IPM practices. The electronic monitoring and automatic pest counting as well as a set of services (LAS, guided spraying) will be provided by the end of the project. He detailed the process and steps needed to their implementation, in which the first task will be the field digitization and geospatial data collection like field borders, tree location, protected area, organic farms, cultivars, location of traps and habitat location.

The third presentation was provided by Andrea Sciarretta, Professor of entomology at the University of Molise (Italy) and entitled “the decision and spraying process of the Medflynet” in which he presented the Mediterranean FruitFly, Ceratitis capitata, its threat and damage induced to soft fruits. He detailed the monitoring system used to determine the flight of the insect to make spraying decision. He emphasized that sprayings were undertaken at calendar bases, and no algorithms or decision diagrams were used. He detailed the control methods of the pest with chemicals (bait or ground sprays), attract and kill method, mass trapping., then he presented the application of Information Technologies and Decision Support Systems (DSS) for precision farming in the context of IPM as prelude of the project FruitFlynet-ii. Then he presented the new monitoring system by detecting the presence of pests and quantifying their abundance in time and space through the creation of maps and performing localized treatments to minimize the use of pesticides. He explained the Location Aware System (LAS) technique to be used for the Medfly and the Decision Support System (DSS) for the Precise Pest Management of Medfly. 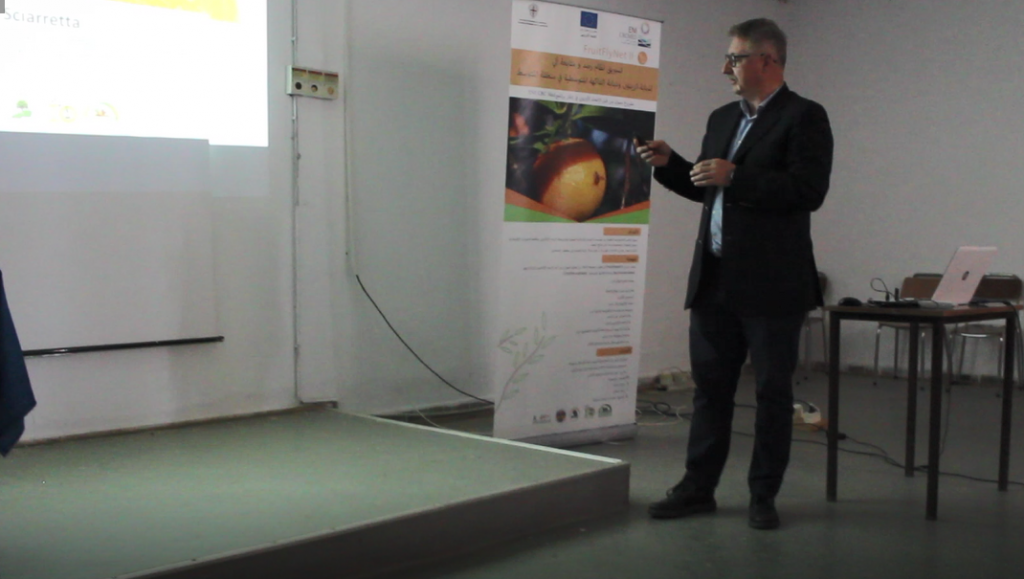 The fourth presentation was given by Mohamed Braham, Professor of Entomology and Ahmed Moussa (IT engineer) at the Regional Research Centre on Horticulture and Organic Agriculture at Chott-Mariem. Tunisia entitled “How to implement the LAS (Location Aware System) for the control the MedFly Ceratitis capitata in Peach/Citrus cultivation in Tunisia” in which they presented the procedures of the LAS Implementation in the experiment peach orchard located in BenArous Governorate (Tunisia) and what has been completed so far. They presented the characteristics of the experimental site by collecting field data relating to the crop, pesticide use, species and varieties, protected zones, fruit repining period, etc. Then they presented the collected-data regarding the experimental site, orchard and peach-trees digitization using Google satellite imagery and Qgis software. Conventional Ceratitis capitata traps were deployed in peach orchard to study the spatial repartition of the insect and to determine the occurrence of natural enemies captured in traps. 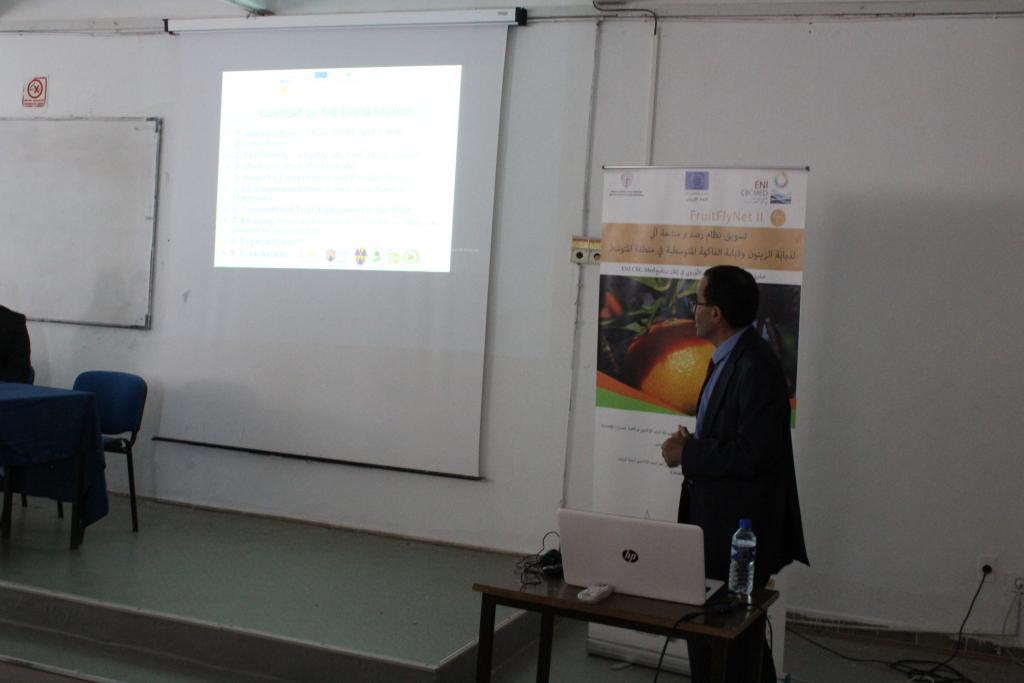 The last speech was given by Dr. Ines Ksentini, a Researcher from the Olive Institute (Tunisia) entitled “Implementing LAS on Bactrocera oleae in Tunisia” is which she presented the progress of the implementation of LAS on Bactrocera oleae in the experimental site in Sfax region (Taous Station). She presented details regarding the Olive Fruit Fly in Tunisia, monitoring systems, control strategies (bait and ground sprays, mass trapping) and the digitization of the olive orchards in the experimental site at Taous. 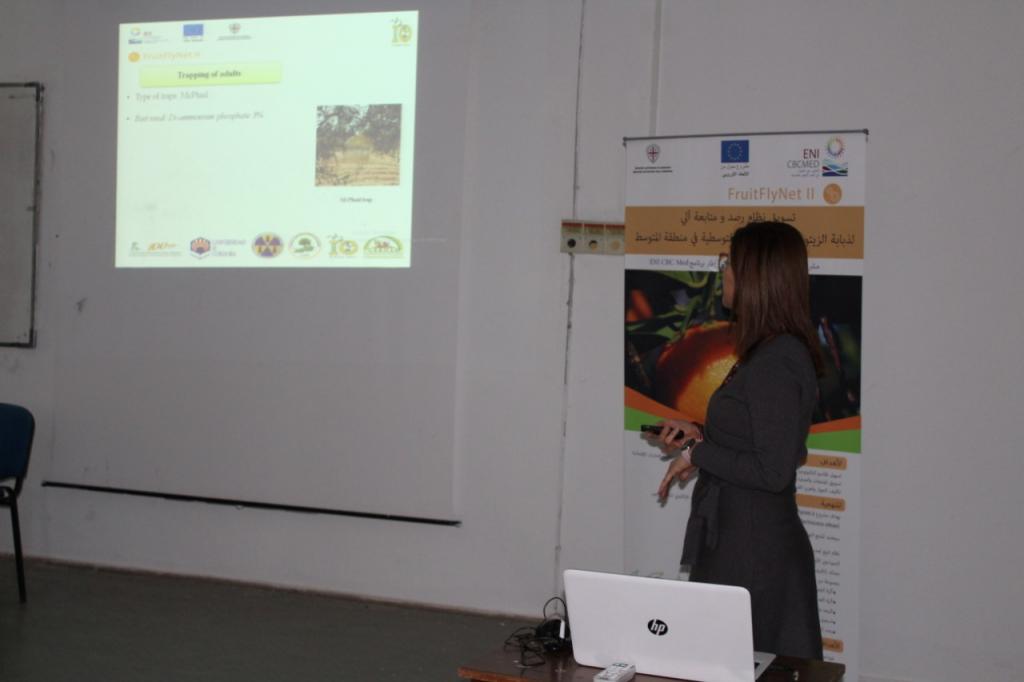 Discussions that followed each presentation were fruitful and very interesting and interactions among attendees (students, teachers, researchers, engineers, technical managers of farms, entomologists) made interesting debates of technical, economic and environmental concerns and open new perspectives for the implementation of insect e-trapping and the future development of LAS in orchards to control the Med fly and the Olive fly.