A great participation was achieved in the Infoday and the Press Day held at Chalkida, Evia in Greece, on Wednesday 21st of July, 2021, within the Skills4Sports project.
The event was attended physically by a significant number of local and regional stakeholders representing local and regional authorities and associations of the sports and youth sectors, while more than 50 people attended the event online though ZOOM platform and Skills4Sports Youtube Channel. Local journalists were also present reporting afterwards the event and the project itself on local and regional media.

The presentation part opened with Mr. Nikos Margaritis’ presentation - Director of Evia Development Agency - who presented in detail the Skills4Sports project. Mr. Margaritis also mentioned that Greece has 20% NEETs of young people among the countries of Europe. Moreover, he stressed that through the project young people will develop new capacities that will meet the market needs and that there will be a new network supporting effectively the job matching in the sports sector. As a result, 1.200 young NEETs, teachers and educational institutions, employers and sports companies, municipal authorities and NGOs are expected to be benefited though their participation in the project.

Following, Mr. Ektor Tsatsoulis, representative of TREK Development S.A. – partner to Skills4Sports, mentioned the importance of the project through the high standards that the cooperation with UEFA offers, saying that “The sports sector has at its core the Athlete, the Athlete needs a great “ecosystem” which supports him or her”. Also, referring to Skills4Sports, he commented that this project is implemented by people who love sports and want to contribute by tackling the skills gap, while there is also an important “tool” to be developed - the strategic transnational alliance, which declares the problems of mismatch and the ways that coordination and development will be better accomplished.

The sports sector has at its core the Athlete, the Athlete needs a great “ecosystem” which supports him or her.
Mr. Ektor Tsatsoulis, representative of TREK Development S.A.

The Vice-Governor of the Region of Central Greece in Education and Sports, Mr. Kostas Galanis, declared that the Region of Central Greece and the Regional Unit of Evia are constantly working to face the problems of sports sector by implementing sports projects, activities and Panhellenic games. Moreover, he underlined the significance of sports as fundamental part of a healthy lifestyle, while he also expressed his concerns for the limited participation of young people in sports nowadays and their distraction by the new technologies.

Mr.Dimitris Tsoumaris, the President of “Dafniforos Apollon” Organisation was referred to the strong desire of young people to be engaged actively in sports and especially football, although the lack of capacities, recognizing that the project has lots of opportunities to offer, especially for the improvement of young people’s skills and capacities. Additionally, he mentioned the lack of sports infrastructure and the lack of jobs in the sports sector e.g. sports managers, personal trainers etc. He also focused on the benefits of the professional education both for young people and the local economy, saying “The professional education is equally important with the general education, it plays an important role to the financial development through the increase of employability and it contributes to form societies with cohesion and equality". 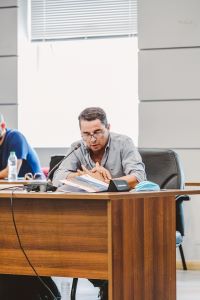 The professional education is equally important with the general education, it plays an important role to the financial development through the increase of employability and it contributes to form societies with cohesion and equality.
Mr.Dimitris Tsoumaris, the President of “Dafniforos Apollon” Organisation

The Olympian in Rhythmic Gymnastics and Vice-President of Greek Gymnastics Academy, Mrs. Irene Aindili, referred to the importance of the transmission of the knowledge from the Olympians to young people through telling them their experience and creating healthy models. In addition, she suggested the cooperation of educational institutions, municipalities and regions with the Olympians and the development of sports tournaments in order to promote mass sports. She also didn’t forget to mention the need of the growth of the non-famous sports and the environmental awareness in the professional education.

It's very important to  transmit the knowledge from the Olympians to young people through telling them their experience and creating healthy models for them.
Olympian in Rhythmic Gymnastics and Vice-President of Greek Gymnastics Academy, Mrs. Irene Aindili

Mr.George Kalitsas, journalist and executive staff member of the Development Agency of Evia, talked about the problem of the professional licenses for coaches and referees which many young unemployed people face. He stated that there is a need of developing special training programs for these jobs in order to enhance young people’s professional engagement in the sector, which also will bring new and modern ideas in the field. Also, he pinpointed the effects of the pandemic and financial crisis by urging the need for e-sports and the development of sports marketing curricula, while new mentalities are born in the sports sector.

The President of the Referee Association of Football Club of Evia, Mr. Eleftherios Fanos, from his point of view stated the new opportunities that football offers not only through the athletes but through the coaches and referees job by developing new capacities and mentality. Through that way, football, one of the most famous sports, contributes to the youth employability and gives the chance to many young people follow their dream jobs enforced with all new training techniques. However, there is still great need of new tournaments, new people, and new mentality.

At the end of presentation Mr.Nikos Rogkas, the Vice-President of Coaches Football Association of Evia reassured within his presentation the need of coaches in the sports sector and their training possibilities through seminars and professional education. Also, he referred to the importance of UEFA D and C diploma for the coaches’ profession and the need of their license recognition in the official network of coaches. It is also significant to mention that he stated the transport problem that coach schools face due to the road network.

The event ended with the questions of the journalists and a further discussion on the needs of the sports sector from the professional training programs and educational tools to the necessary infrastructure, the motivation for young people and the enhancement of the employment. Meanwhile, what the Skills4Sports project can offer towards this direction and how this will be achieved was the main point of discussion.