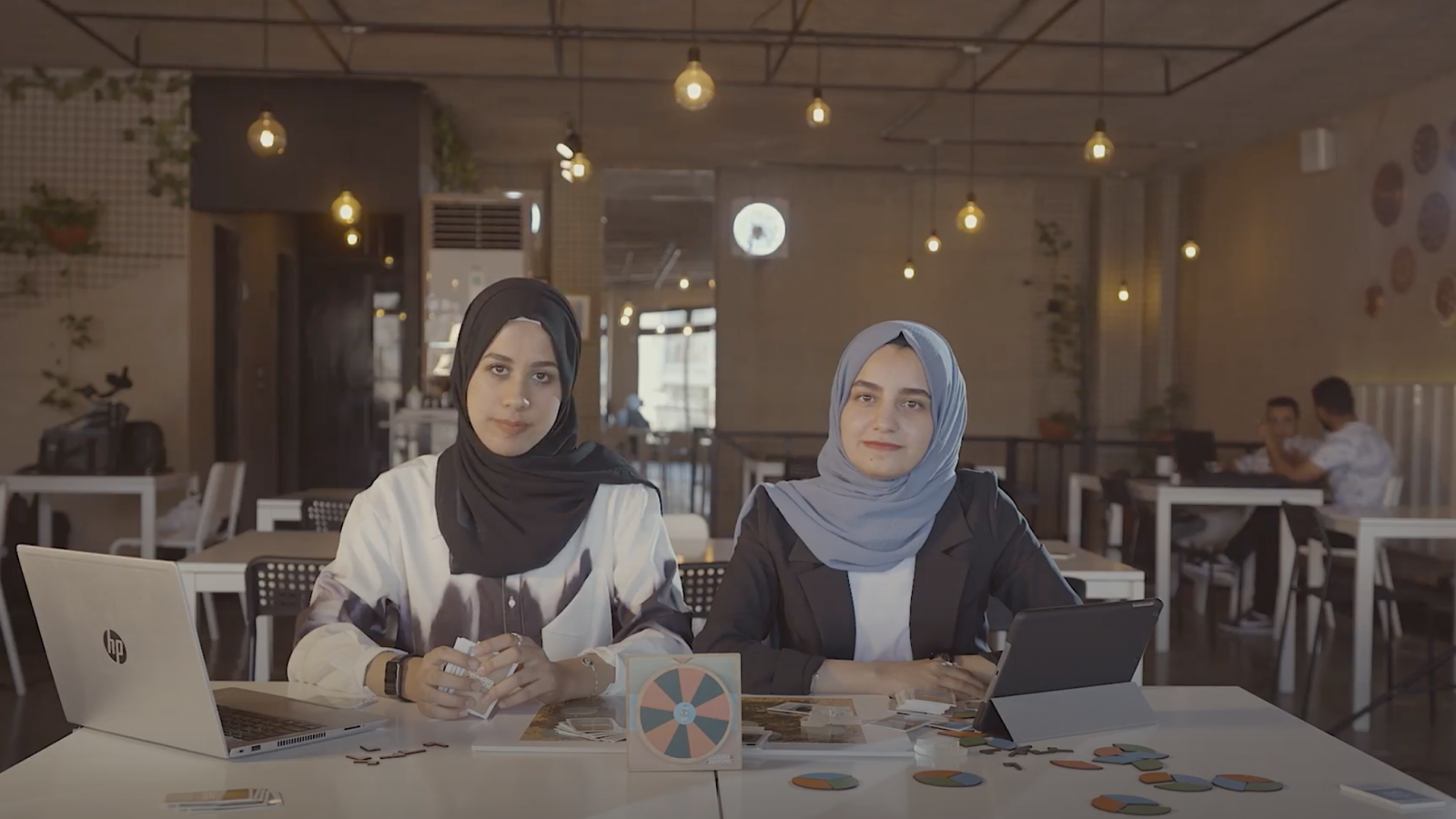 This story was originally published by EU Neighbours on the occasion of the World Youth Skills Day (15 July 2021).

Fascinated by the myriad of hidden stories archaeological sites have to offer, Sondos Al Rqibat had become frustrated with the lack of interaction tourists have with their environment. In a country like Jordan, home to the one of world’s Seven Wonders, the 24-year-old felt as if history and knowledge of ancient civilisations were slowly going to waste. “It seemed like tourists were not really remembering anything about the places they visited. They would hear stories then forget very easily.”  Sondos then came up with the idea of an innovative interactive board game -Gadara spinner- “to make stories of ancient civilisations stick in people’s mind”. The design and visual communication graduate paired up with programmer Rand Agha and entered the ENI CBC Med-funded MED GAIMS project to help them bring this idea to life.

Entirely based on luck, the game engages players through the collection of informative cards and 3D models of Gadara’s archaeological sites. “It is fun, because you can’t cheat your luck and you may have to wait 10 rounds before it is your tun to play! But it is also a way of introducing information to the tourists by triggering their curiosity.”

The ancient Gadara (or modern Umm Qais) located in northern Jordan, boasts one of the richest multi-layered heritage from ancient civilizations -Greeks, Romans, Ottomans-. Yet, Sondos says she found little to no documentation of these periods online. This is what prompted her to gather stories from locals living around the site and use them as a basis for her game. “I want to use my game to educate, entertain and help people appreciate their culture and history.” The duo now plans to establish a game startup focusing on making Jordan’s ancient cities more attractive to tourists, ultimately contributing to job creation for fresh graduates and youth ​empowerment.

Everyone is creative and has the potential to invent new things. When you have the opportunity to turn your idea into reality, you should do it and let the world experience it! In order to achieve your dreams, you need to take one step at a time. You must keep on stepping, be patient, and not be afraid, because fear kills more dreams than failure does.
Sondos Al Rqibat, game designer from Jordan

The 'GAmifIcation for Memorable tourist experienceS' (MED GAIMS) is a 3-year EU-funded (€2.3 million) project under the ENI CBC Med Programme, MED GAIMS aims to revamp and boost the tourism sector in Italy, Lebanon, Jordan and Spain, using the concept of gamification (physical and virtual) to increase tourism flows to less-known sites. The project also seeks to generate new employment/business opportunities for the local communities, with a specific focus on youth, women and SMEs.

Programme
Projects
Back to news