MedTOWN co-production in Portugal: the Lisbon neighbourhood where an Agroforest was born 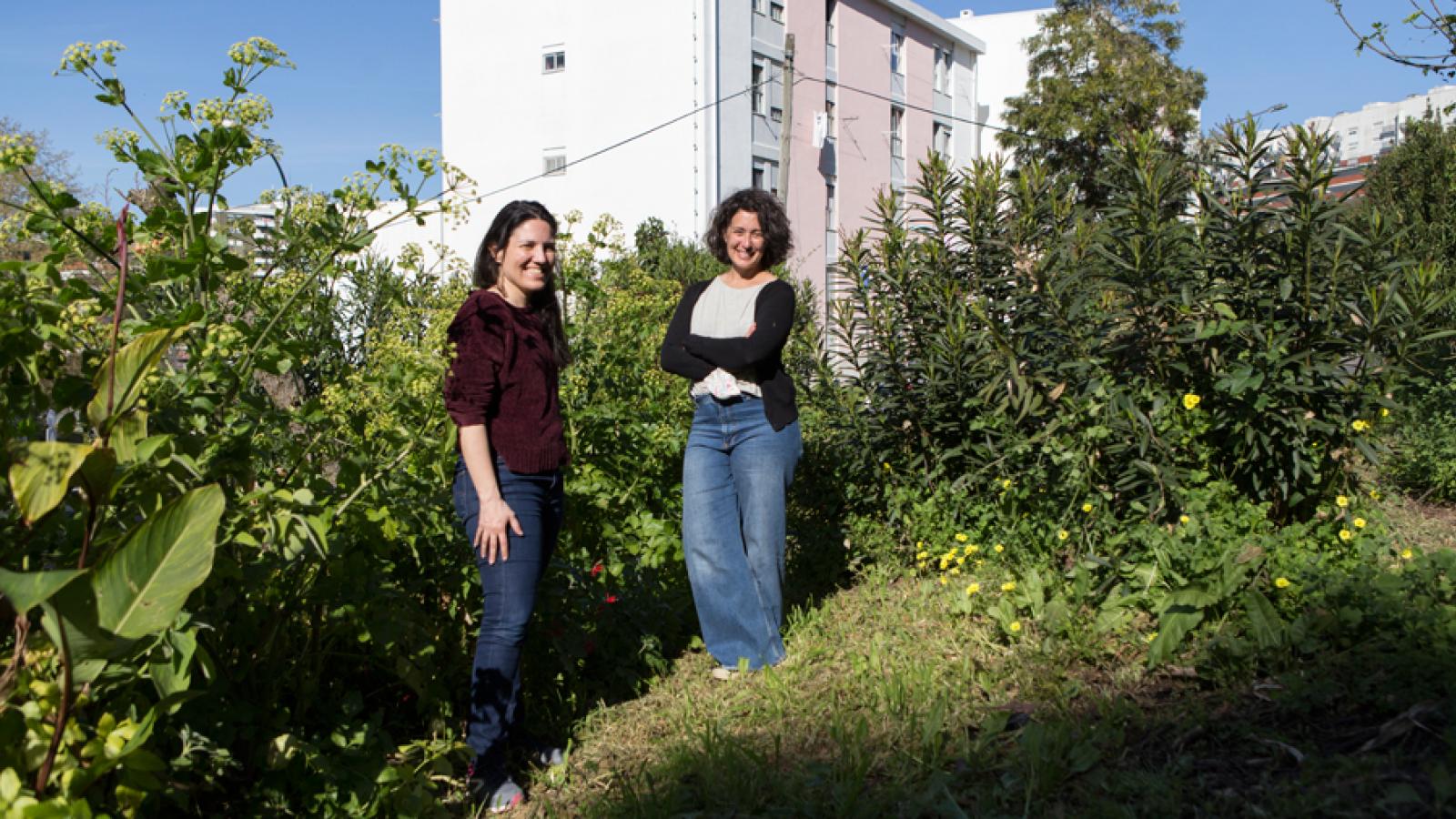 Late summer is being a very active period for our Portuguese team! We invite you to learn about MedTOWN project and better understand the co-production process through this article from Greensavers magazine (Portugal) that visibilizes the hard & carefully thought-out work our wonderful team are doing there, and the very tangible example the Campolide Agroforest provides.

In an area of 400 square metres, once abandoned, today you can see land full of life, which is thriving thanks to the community's dedication.

The wind blows in the air and you can smell the wild flowers and aromatic herbs. In the distance, the sound of birds confuses our senses. Every now and then a butterfly flies by and you can smell the fragrance of aromatic herbs. But we are not in the middle of the countryside, in fact, we are in the middle of the city of Lisbon... in the Agroforestry of Campolide - Bela Flor Respira.

It was in September 2019 when MedTOWN project emerged, whose action would materialize in the Agroforest of Bela Flor. But before we talk about the project itself, we need to understand the origin of this space in the Campolide area. In 2018 Bela Flor Respira applied to the BIP/ZIP programme, funded by the Lisbon City Council, and won. Thus, the Campolide Agroforest of was born. The idea was to boost the priority intervention areas and neighbourhoods, one of them being Bela Flor. 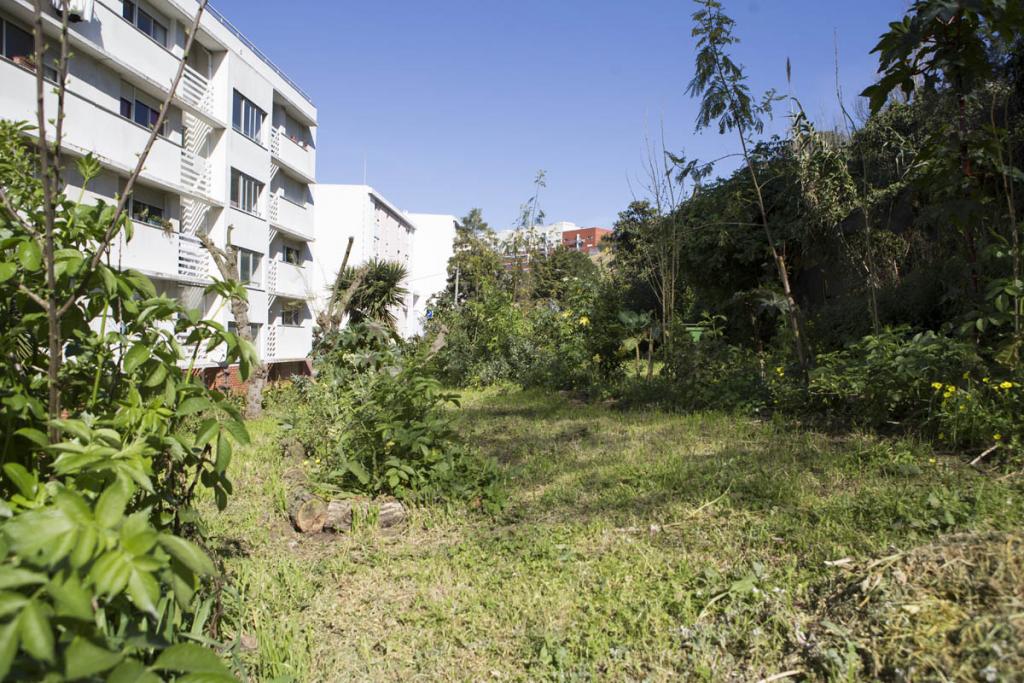 A consortium was then created, consisting of Junta de Freguesia (Municipality of Campolide), Circular Economy Portugal, Cooperativa da Habitação, Associação Viver Campolide, BioVilla and Santana Futebol Clube, which ended up winning a funding of 50 thousand euros to, during one year, develop an impact initiative of community development in this neighbourhood. In order to continue the project and the management of the space, MedTOWN project ended up intervening and continuing to give life to it. But after all, what is MedTOWN?

It results from a European Union cross-border cooperation funding programme and is therefore funded by this programme, ENI CBC MED", explains Cristina Sousa, the project coordinator at a national level. In Portugal, MedTOWN is present in the Agroforest, and its main concept is that of coproduction, that is, to create an action in favour of sustainable, egalitarian local development, which promotes justice and social inclusion, integrating the beneficiaries throughout the process. Basically, the residents are involved and are themselves part of this solution, and it is through the tools provided by the public administration and the social and solidarity economy that they manage to jointly achieve their goal. 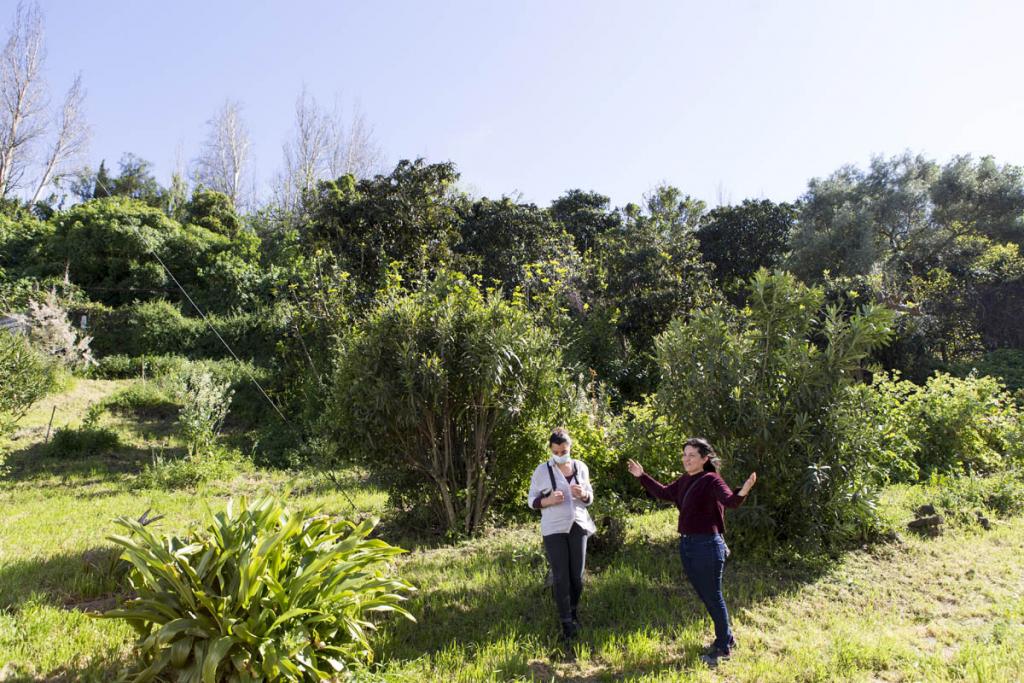 Bela Flor Respira thus has an environmental and social aspect; it promotes environmental sustainability, economic sustainability, social, cultural and ethical integration. "The project has above all three pillars of action", adds the coordinator. Firstly, that of capacity-building, where the aim is to train local agents so that they themselves can convey knowledge about the social and solidarity economy to the community, and thus begin more participative and inclusive processes.

The second aspect is to understand what the social and solidarity economy is in Portugal, how it fits into the national context, and to disseminate it. "Local associations, the municipality and other public entities make the tools of the social and solidarity economy known, so that we can understand how we can find effective forms of cooperation and sharing of resources," Cristina Sousa explains. The third pillar corresponds to the demonstrative action in which people understand in practice how all this works, focusing on the Agroforestry project. Although the covid-19 pandemic has led to some delays in the project's development, and made sharing between the community, volunteers and workers impossible, the space continues to develop. Although, at the beginning, gaining the trust of the community was difficult, today the involvement is already quite positive, says Joaquim Espada, a local trainer specialised in the concept of syntropic agriculture. 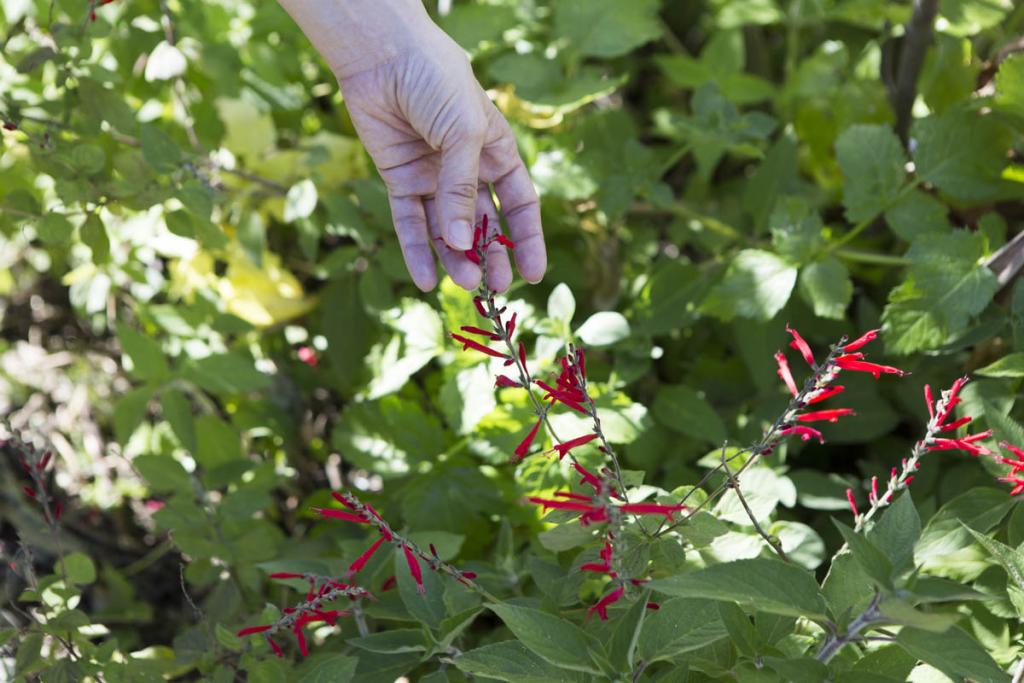 "Little by little I think they get involved, they start thinking: 'these people have been here for so long, maybe they are not going to leave (laughs). They're here to stay'". Some training courses and workshops have already been given, namely in terms of cultivation and agricultural production, permaculture, as well as concepts of social and solidarity economy, circular economy and even creative community carpentry workshops. In the latter, several benches were made with the community, using wood provided by the Junta de Freguesia, which was then reused instead of being thrown away. Every Thursday, from 10am to 6pm, the Agroforest receives a visit from two workers, Joaquim Espada, a trainer specializing in the concept of syntropic agriculture, and also Cátia Sá, specialized in community dynamics. Together they maintain the space and welcome volunteers and residents, sharing their knowledge.

Anyone can be part of this project and join in this space, because Bela Flor is open to the rest of the city. Cátia Sá recalls, "The other day we arrived here and there was this line planted with cabbages. Then a neighbour came over and said: "I came from down there, I had those cabbages and I saw that they were planting those rows, so I planted them there too". There is always monitoring by the trainers and the team from the Campolide borough council, so that there is no need for knowledge, no need to follow an agenda, all that is needed is interest and the will to learn and to participate. It is also to the sound of the concertina and the good humour of neighbour Salvador that the team has already carried out several plantations and had some enjoyable times. 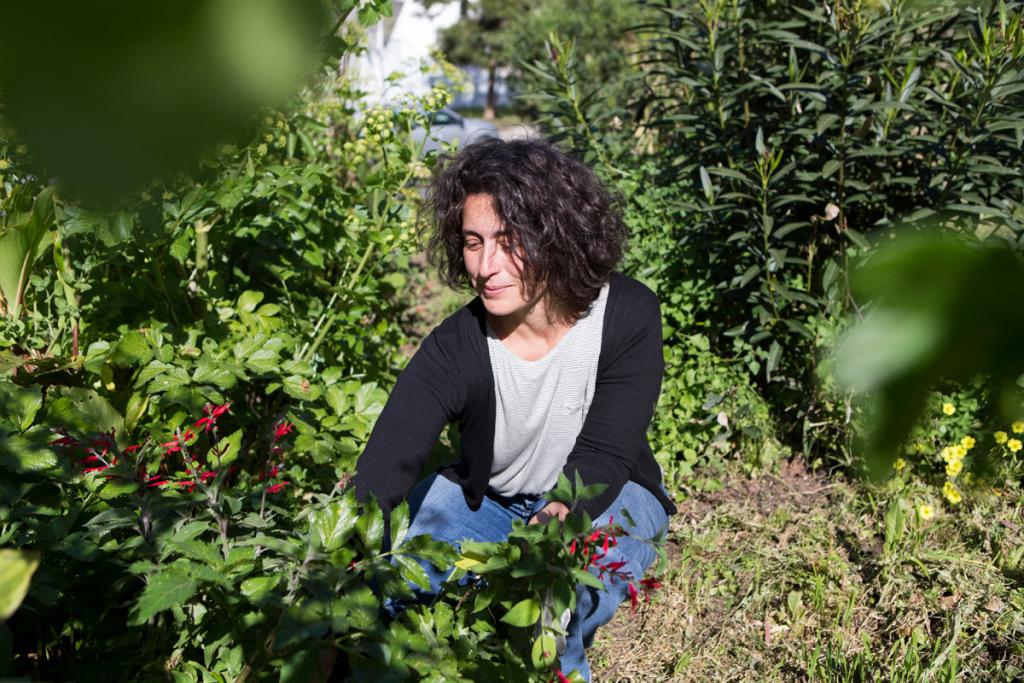 Neighbour Jacinta and her funny way of being are also remembered, as well as some snacks offered by the residents of the building opposite, such as Madalena's cakes. But if you think that this space is only for those close by, you are wrong. On Thursday 18th March, we also met Lisa, a German volunteer who, whenever she comes to Lisbon, likes to visit the Agroforest. "It's the only vegetable garden I found in Lisbon where you can help, where everyone can come without having to be a member of an association, or be a neighbour, and I really liked the atmosphere and how open it is for everyone to help and learn", she reveals. What makes Bela Flor Respira different from other urban gardens?

It is a place where you can see the balance between the participation of the community and the ecosystem itself. Moreover, in this space there is not just one crop, the planting is done with many species planted together and in a row. From trees to vegetable and fruit species or aromatic herbs. When you look around, you can see a bit of everything: beans, tomatoes, lettuce, cabbages, poplars, peach trees, ash trees, fig trees, loquat trees, kale, pomegranates, broad beans, peas, rosemary, laurel and many more. In this space, even invasive plants are important. As she explains, "there are no weeds, all the herbs have their own function and reflect something that exists on site and in the ecosystem". 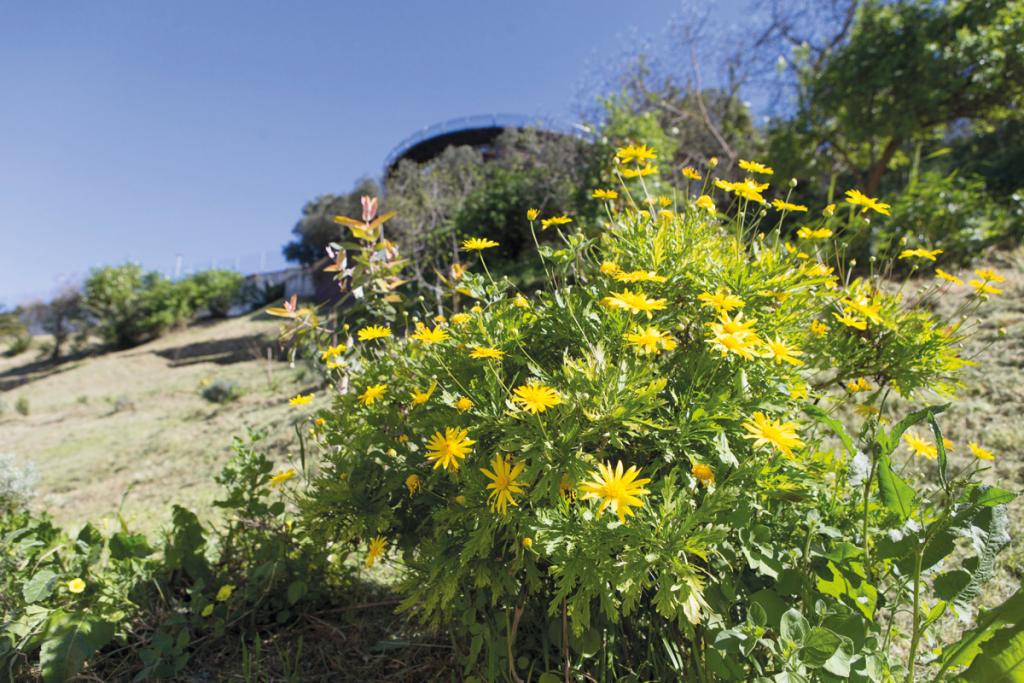 Besides this, no pesticides or fertilizers are used - everything is done manually and with what the space itself produces. The idea is to understand what responses the ecosystem gives, if you plant something and the species doesn't do well, you change the place and try to understand why, you don't force it. There is also a circularity, and the aim is that although there is still an entrance, that there is not an exit. "The piles of organic material are the results of pruning and we're returning the organic material to the soil, so nothing comes out, it's a closed loop." In partnership with a company that uses coffee grounds to make mushrooms, Campolide Agroforest receives the post-production waste and integrates it into the soil.

Meanwhile, some neighbours contribute their own compost, or the Junta de Freguesia itself brings some of the collected material to the space. At the same time, the vegetable garden has been lined with different pieces of wood, which come mostly from pruning the trees there, although also from outside arrangements, thus always being reused.

Rainwater is recovered, the professionals try to use the lines with the wood in order to retain humidity and consequently less need to irrigate, thus keeping the water in the soil. "The idea is to create an ecosystem in which the shading of some of the trees and the coverage of the soil means that the need for irrigation is increasingly low, and the system is self-regulating", Cristina Sousa explains. 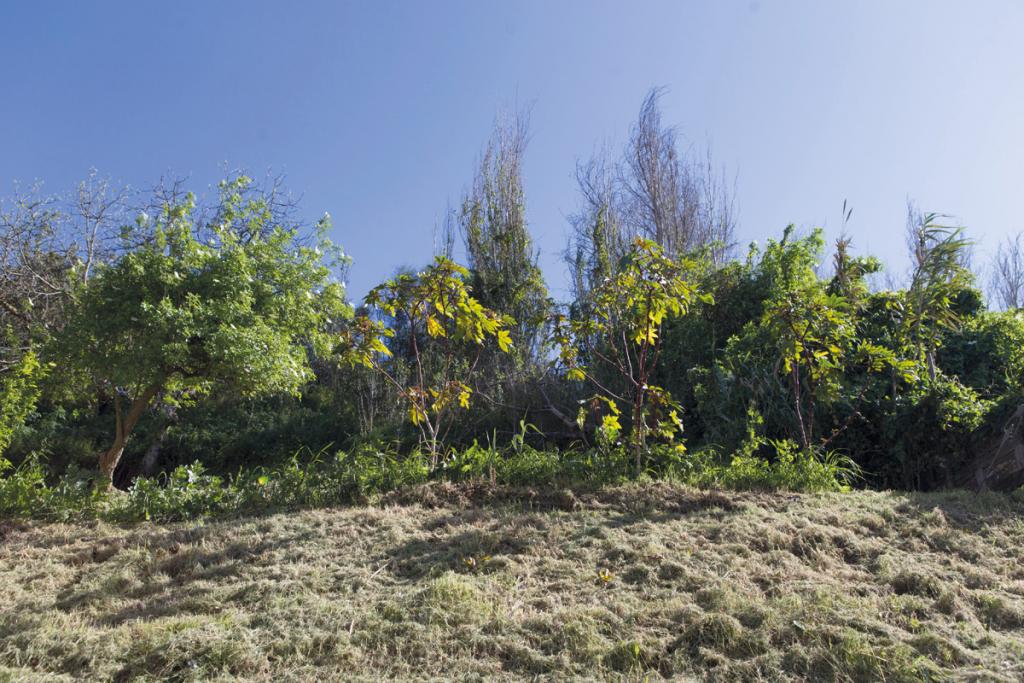 "There is carbon fixation here not only associated with the plants, but above all with soil rehabilitation, there is better water management," she adds. Some of the direct benefits that can be highlighted are the existence of a cooler area with shade, the prevention of heat waves, and above all the naturalisation of urban centres. The idea is that in the future the space can be expanded and more autochthonous trees can be planted, such as strawberry trees, myrtles and laurels. Being a space made with the community and essentially for the community, decisions are also made with their help.

For example, the row closest to the windows of the houses is composed of aromatic plants, at the request of the neighbours. Another situation that portrays this proximity was the fact that, during the pandemic, two families planted a tree in the space in a symbolic way on their children's birthdays - besides it being sponsored by the little ones, who received a certificate, they can also visit it whenever they want. "The main intention of this project is to promote this reciprocity, neighbourliness and cooperation - which should flourish in any neighbourhood", Cristina Sousa added.

But this community is not only made of plants and humans. It is also the space of butterflies, worms, birds, snails, cats and dogs, a rooster and a hen. Basically, in this Agroforest there is room for everyone: for humans, as caretakers and cultivators of biodiversity; for the animals, as pollinators and fuel for the functioning of the ecosystem; and for the plants, as the main figure that gives reason and being to their life.

A place where environmental and social well-being come together, hand in hand, as one.