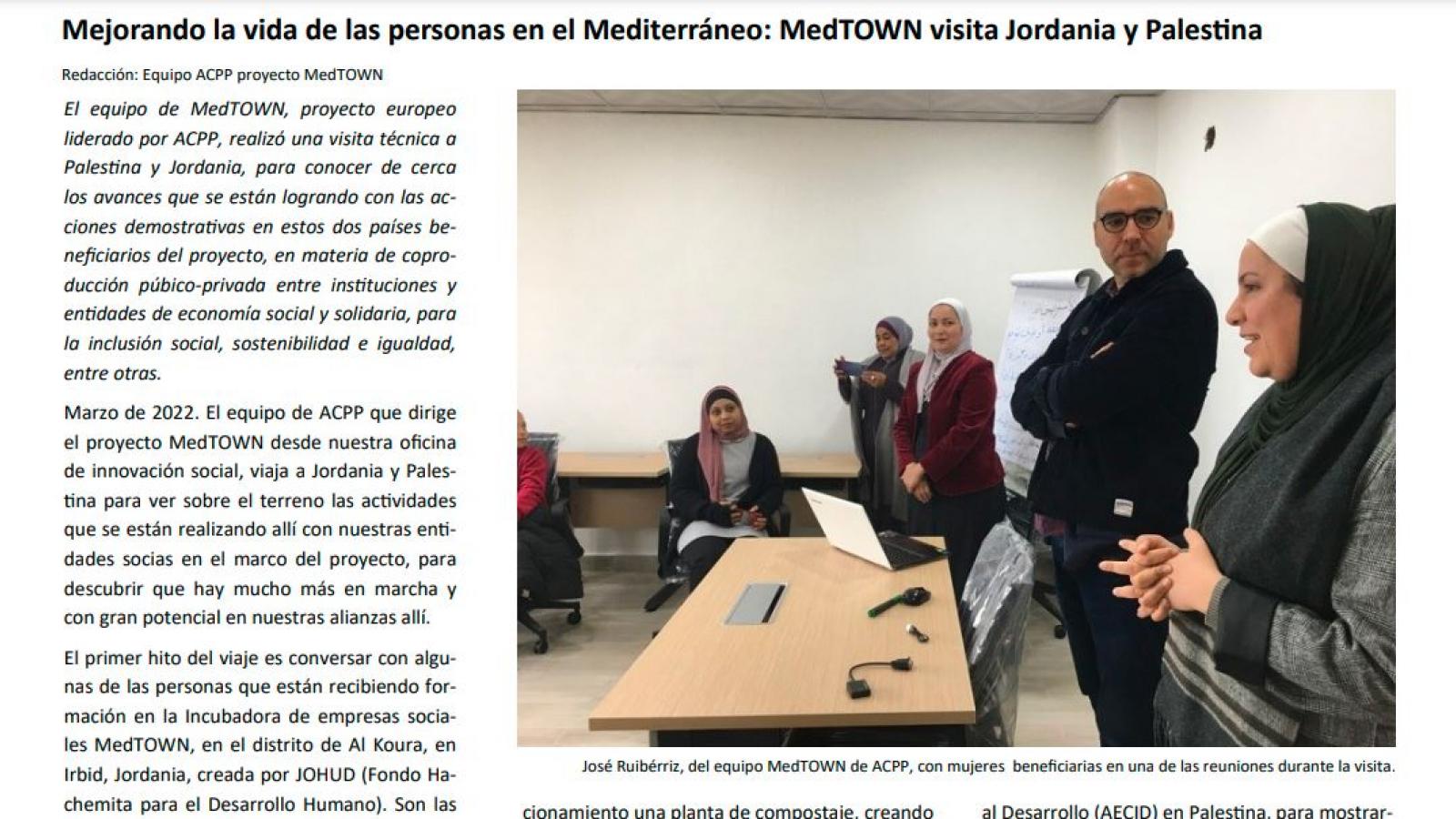 MedTOWN´s team made a technical visit to Palestine and Jordan, to learn about the progress being made with the demonstrative actions, in terms of public-private co-production between institutions and entities of social and solidarity economy, for social inclusion, sustainability and equality, among others.

Lead by ACPP's , the Spanish NGO leading the project traveled to Jordan and Palestine in March 2022 to see on the ground the activities being carried out there with local partners, to discover that there is much more going on and great potential in the partnerships there.

The first milestone of the trip was to talk to some of the people who are receiving training at the MedTOWN Social Enterprise Incubator in the district of Al Koura, in Irbid, Jordan, created by the Hashemite Fund for Human Development, JOHUD, the Jordanian partner of MedTOWN. In this first phase, 100 people are benefiting.

The first goup of 20 people was starting their training. They are mainly Jordanian and Syrian refugee women and people with disabilities with their individual business ideas and thanks to this training, they are beginning to see that they can join forces by combining their projects and the great potential of private-public co-production.

Once in Ramallah, MedTOWN’s Palestinian partners: the Palestinian Hydrological Group (PHG) and the Palestinian Association for Agricultural Development (PARC) and ACPP (Spanish and Middle East teams) shared the development of the activity there: a community waste separation and collection process in the small village of Beitillu. The demonstrative action aims to implement a complementary currency to promote citizen's involvement in waste management.

In addition, a meeting was held with the City Council and local organisations involved in the process, confirming that public-private co-production is a viable formula. And they also participated in the sharing of feasibility and legal studies for the development of the project.

The bilateral meeting held by MedTOWN team and SIRCLES project, also developed in the framework of ENI CBC Med Programme and working in Beitillu to set up a composting plant, creating jobs for young people, reinforced the synergies between the two projects and proved that they complement each other perfectly.

The visit also served to see first-hand other interesting projects that MedTOWN partners are carrying out, such as the implementation of a cash transfer system at Humanitarian Action in the Palestinian village of Salfit, where 200 users are supporting the local economy through their social aid by using the payment system developed in the framework of MedTOWN with technology from Clickoin, the project's technology partner.

It was a good opportunity as well to talk to beneficiaries who are learning skills and empowering themselves through other projects at JOHUD's Digital Women's Centre in Sheikh Hussain, north of the Jordan Valley; and to the Bint Bladi cooperative that employs local women by creating healthy date bars and developing export plans.

Before leaving, the team closed the trip with a useful meeting with representatives of the Spanish Agency for International Development Cooperation (AECID) in Palestine, to show them MedTOWN and MedRiSSE projects, to talk about the value of the electronic payment system for the management of economic aid in Humanitarian Action and strength ties for future collaborations.

There is still work to be done on these projects and the process will be complex, but this visit shows the team that the experimentation they are getting to carry out is useful for people, that the partnerships they have in these countries are consolidated and have great potential for the future and, above all, that the processes of co-production of public policies work and contribute a lot to the society where they are carried out.

MedTOWN’s trip to Jordan and Palestine, held on March, has been featured on ACPP’s Newsletter edited in June 2022.

Asamblea de Cooperación por la Paz (ACPP), MedTOWN project lead beneficiary, publishes in Spain a newsletter in which it reports on the most important activities carried out by the organization around the world during the previous months.

You can read the complete article (in Spanish) at this link.

More info: at our community of practice platform: https://cop.acpp.com/
or contact us through: medtown@acpp.com