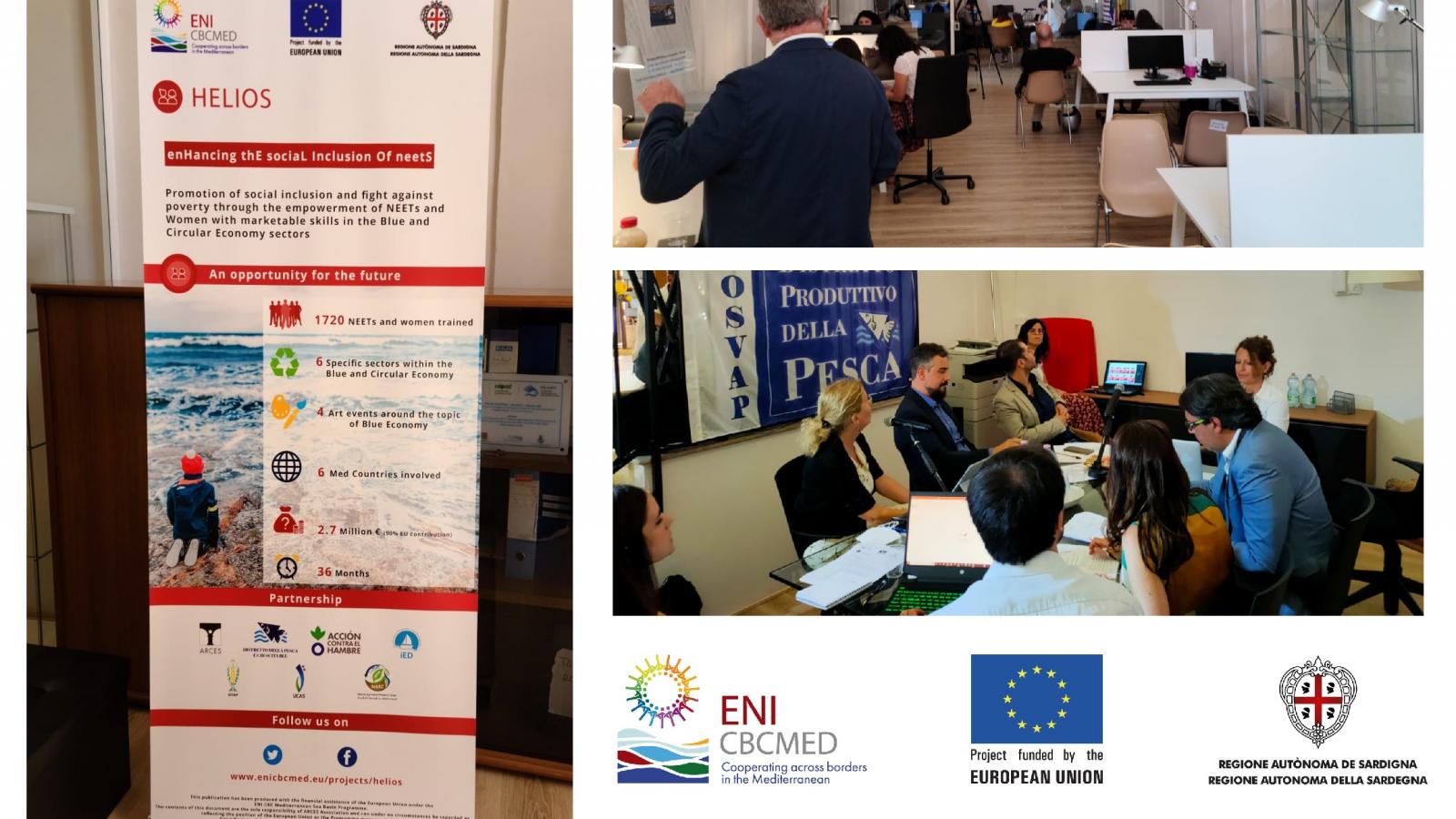 The promotion of social inclusion of young people who are not in Education, Employment or Tranining (NEETs) and women in the emerging Green and Blue Economy sectors is strengthened with a new and fruitful step forward: on Friday, July 1,2022, the HELIOS Project Capitalization Workshop was held in the Sicilian city of Mazara del Vallo, organized by the lead partner ARCES together with the District of Fisheries and Blue Growth - COSVAP, an other Italian partner of HELIOS..

The workshop was an opportunity to meet and exchange experiences among different projects of the ENI CBC MED program working on similar issues: GREENLAND, CLUSTER, RESET and MYSEA, as well as HELIOS hosts. Representing MYSEA project, three members of CIES Onlus, MYSEA's lead beneficiary, flew to Sicily: Loredana Gionne (Head of International Cooperation and Co-Development Department), Francesco Quagliani (MYSEA Junior Project Manager) and Leonardo Galletti (Data Entry and Coordination Assistant). The event was a crucial opportunity to present MYSEA - particularly the results of the Cross-Border research and the workshops that are in the final phase of design - to a variety of social, institutional and economic realities: from the city's mayor to trade associations, from industry representatives to those of Vocational Training Institutions.

A very important result was the creation of a meeting point between the associations promoting the projects and the organizations in the region: the mutual acquaintance brought out a common interest and the identification of shared problems. Once again all participants agreed on the importance of vocational training for young people to foster economic development, social inclusion and the need for "green skills" in a world increasingly interconnected and involved in the ecological transition.

In the specificity of the Sicilian context, local authorities and economic actors made us aware of the challenges that the Blue Economy sector, understood as the set of economic activities that revolve around the maritime environment, is facing in recent years. Sicily, and in particular the city of Mazara del Vallo that hosted the event, is a region where the maritime economy has historically played a major role, but which sees its nature struggling with significant challenges. The fishing industry system, on which a large portion of the regional economy is based, is currently suffering a crisis due to a lack of professionalism. Young people are losing interest in traditional fishing activities, and the emigration rate remains consistently high. The lack of generational turnover means that the cultural and professional legacy built up through experience is in danger of not being transferred to future generations.

All of the workshop participants hope that substantial innovation in the sector will come soon, which can be attractive to young Sicilians and simultaneously competitive in the international market. It is no coincidence that Sicily is one of the locations where MYSEA workshops will be implemented. It was significant to see how from these institutions there was a kind of "call for help" to MYSEA project in pursuing its goals, because a successful project is also beneficial to the entire social welfare. The promise we feel to make is to give this synergy a future over time: our commitment is to work together to connect the needs of local governments, companies, and especially young people, women and NEETs, through the precious tool of vocational training.