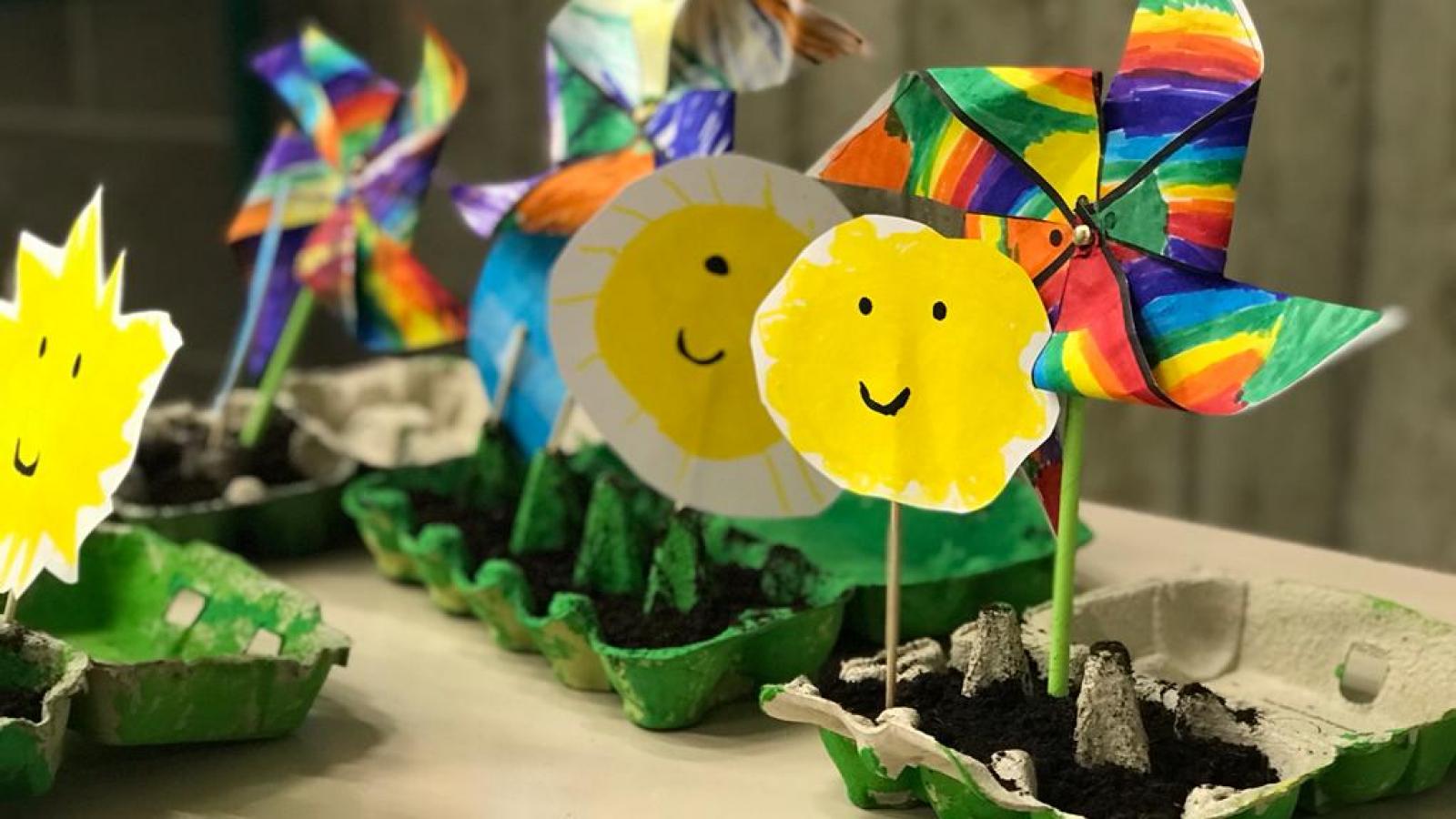 SOLE project contributed to the European Sustainable Energy Week (EUSEW) by participating to one of the main event’s sessions in Brussels and to the Sustainable Energy Days in Prato. Both initiatives represented an extremely important chance to promote SOLE project, with its energy requalification interventions and its ACT GREEN campaign, to policy makers, experts as well as to citizens.

During the Brussels’ session, SOLE’s project manager Rosa Schina contributed to an interesting discussion by a panel of Spanish, Greek, Italian and Jordanian representatives from several energy efficiency projects co-funded by the ENI CBC MED programme. The session portrayed examples of how to perform cost-effective energy renovations of public buildings on both shores of the Mediterranean: solutions implemented in different context were presented and put in the context of global policies.
The event also included a focus on green career opportunities in building energy renovation which can represent a great employment opportunity for young people across the Mediterranean.
The session was coordinated by Alejandro Lafarga, Programme officer at ENI CBC MED.

A few shots of the session in Brussels

At the same time, the Municipality of Prato, the Regional Resource Recovery Agency of Tuscany (ARRR) and Anci Toscana jointly delivered a series of events in Prato which were also featured on the 2022 official Sustainable Energy Days programme. The Prato Sustainable Energy Days celebrated the theme of sustainable energy and cities, by delivering presentations, organising fun hands-on activities and workshops on SOLE’s ACT GREEN campaign and on Prato Urban Jungle - PUJ (UIA) in various schools.

295 students and 43 teachers took part to the initiative which was introduced by two Councillors from the Municipality of Prato, Ilaria Santi and Benedetta Squittieri, by Irene Tirinato from Prato Municipality’s Circular Economy Department, Tiziano Bucciardini from ARRR and Valentina Bucchi from the EU project office of Anci Toscana.

Three kinds of workshops were offered:

> Kindergarten shools: a garden in a box to celebrate sustainable energy and cities

During the Sustainable Energy Days, the participating schools put on display the creative works produced by their students as a result of various ACT GREEN workshops which took place in June 2022 and recreated an indoor forest with a myriad of 'gardens in a box', with plants and soil donated by Consiag Servizi, placed in egg boxes by students as part of a PUJ lab. The kids only used recycles materials for this task. All gardens in a box included a paper sun as a reference to solar energy and to project SOLE (the Italian for ‘sun’). The students prepared their ‘gardens in a box’ during Prato’s Sustainable Energy Days: once grown, all the tiny plants will be transplanted in a specific area in the participating schools’ gardens. These activities were guided by Elena Canna from Legambiente, while teachers Simone Rizzuto and Marta Del Rosso helped their students delivering a presentation on the flowerbeds and bug hotels created in their school gardens thanks to the PUJ project.

Both correct and wrong daily behaviours to reduce energy consumption were presented to the students by Susanna Ceccanti from ARRR: after the presentation, kids were split into two groups, the energy conscious team and the energy wasters’. At this stage, they had to cut out, colour and glue various elements to some billboards depicting typical environments of a house, according to their role. If they belonged to the energy wasters’ their goal was to create the most unsustainable kitchen / living room / bathroom and so on. On the contrary, the energy conscious team had to come up with the most eco-friendly environments. Once finished, the various rooms were put together as to represent two houses, one making the best use of energy and one making the worst possible use of it. This workshop was extremely popular, students and teachers were actively engaged and gave very positive feedback on the initiative. 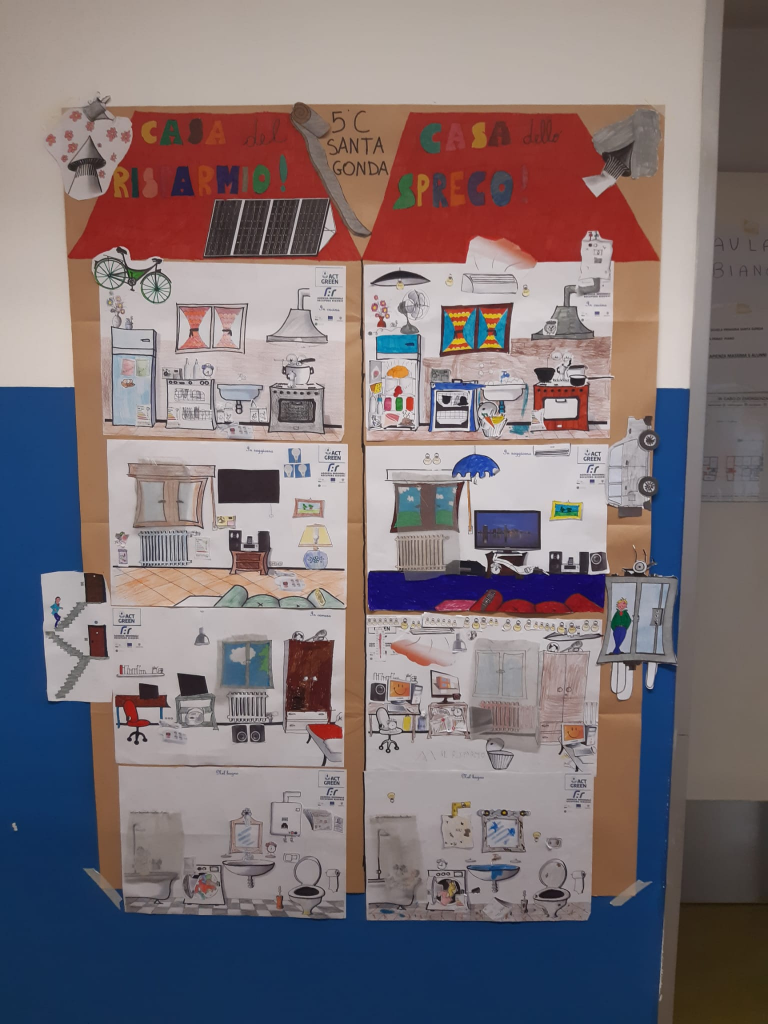 > Secondary schools: let’s discover the ACT GREEN campaign and learn how to read an energy bill

Tiziano Bucciardini from ARRR presented the ACT GREEN campaign, with its 10 easy steps to follow to reduce our energy consumption both at home and in the workplace. Tiziano also gave practical information on how to measure energy (watts, calories and kilowatt hours etc) and on how to read an energy bill of gas and electricity (energy component and other cost items). Various videos were shown to the students, to make it easier for them to remember the key lessons. The goal of this workshop was to provide young people with the knowledge and skills needed to be in a position to also advise their parents on the correct use of energy.

Project SOLE and its staff strongly believe that encouraging schools and families to embrace eco-friendly concepts will definitely have a positive impact on the reduction of energy waste in Mediterranean countries and on the creation of long-term sustainable habits for a healthier way of living on this planet. We were proud to carry out such an initiative in a city like Prato, in schools that bring together communities from various cultural backgrounds and in partnership with a project like PUJ which aims to bring back nature into the urban landscape.