The last 7th of July, the SOLE Project organized a seminar regarding the design and implementation of measures to increase awareness and change behavior among building users and the strategic role of consumption monitoring systems after energy requalification interventions to measure the related impact.

SOLE supports cost-effective and innovative energy rehabilitations in selected public building in the Mediterranean. Besides these pilots, SOLE will also intervene at two levels: first, by encouraging behavioral change in people, inspired by an Interreg experience (REBUS project) and, secondly, by impacting on local policies through lobbying and advocacy to integrate the pilots´ results in relevant policy frameworks.

As referred above, behavioral change promoted by SOLE is inspired by another Interreg project in which, the Agenzia Regionale Recupero Risorse (ARRR) was a partner and they are in charge now of the project component related to the Capacity Building and Behavioral Change. For this reason, during the Seminar, Rich Hurst from Durham County Council (UK) introduced the REBUS Project, in which the public body was lead partner, focusing on good practices regarding consumption monitoring systems and behavior change.

Interestingly, due to a climate emergency in 2019, the City Council engaged with citizens and other public bodies to reduce consistently carbon emission. Rich Hurst explained how the Durham County Council started to use Systemslink, a  software to collect billing and usage energy data, thus tracking all sources of energy consumption and creating a dataset to monitor the changes. At the same time REBUS Project launched the Big Switch Off, the behavior change campaign;  two weeks staff awareness campaign aimed at reducing building electricity consumption by encouraging behavioral change in building users. In parallel, social marketing techniques helped to widespread the messages. Barriers to behavior change where identified and starting from them, interventions to target those specific barriers where designed. In particular social marketing techniques resulted very effective to promote behavior change. Some examples are display boards, staff surveys, posters, volunteers and managers promoting the campaign, staff pledges, daily emails with information, facts, myth busters and an ‘Action for the Day’, daily monitoring of electricity consumption and comparison with the baseline usage, daily feedback to staff on the electricity consumption of the building using a ‘speedometer’ dial which shows whether the usage has increased or decreased. As a result of these actions savings ranged between 8% and 18% of building electricity consumption have been achieved through the campaign, with these savings being maintained for over a year.

A success factors’ analysis suggests that managers and volunteers on board stimulates new social interactions through which energy-saving behavior is encouraged as well as receiving feedback on the impact of actions to reduce electricity consumption. It has been observed that creating an environment in which the collective effort to reduce electricity consumption is seen like a game and in which people are stimulated to participate in may have a very positive impact.

After the introduction to REBUS Project and the experience of the Big Switch Off, Tiziano Bucciardini from ARRR (Regional Agency for Recovery Resources), project partner, showed the best practices developed in Greve in Chianti, a small Tuscan municipality, starting from REBUS Project and planning an Action Plan inspired by the Big Switch Off Practices from Durham City Council. The pilot tested a capacity building programme with the Local Council.

Following a cycle of capacity building events, an energy team was trained to assess the status of the pilot building. Improved behavior of building users led to energy savings amounting to 11.55% compared to 2019 and -33.68% compared to 2015. The experience within the partnership of the European project REBUS has showed the importance of having well-trained staff in public administrations who can deal with energy efficiency competently; equally important is having the building users well informed.

Thanks to that experience, the partner ARRR started to develop the SOLE capacity building pack, moving  from the Big Switch Off campaign to the new SOLE Campaign “Act Green”, with a dedicated graphic communication. 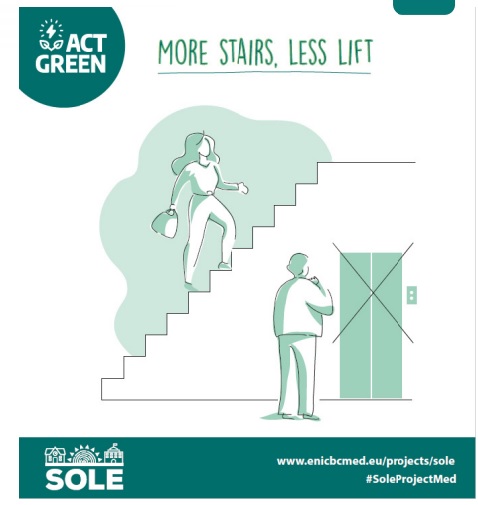 During the Seminar other practical experiences where showed. In particular, the partner Andalusian Energy Agency (AEA) from Spain shared the main results of the Med-Desire Project  financed by the ENPI CBC Med Programme (2007-2013) in terms of raising awareness activities, focusing on the specific added value of some tools like videos, leaflets tailored to country conditions, school and sport activities like a football tournament. You can fin here an example.

The Jordanian partner Royal Scientific Society described the foreseen intervention in their pilot, in the south-west of the capital city Amman, concerning the Iskan Faiha' primary school. A baseline concerning the current level of energy consumption and a plan to reduce it was shared during the Seminar, with interventions on the roof, windows and external walls. Very interesting the approach to schools to change behavior, not only for the continuous arriving of new young people each year but also because in remote areas has been observed a very low awareness about energy saving and access to technology may be hard.

This 3° Seminar helped the partnership and citizens to deepen knowledge about an important challenge for the management of public buildings, in terms of both environmental protection and public savings, a win win strategy at the heart of the SOLE project.