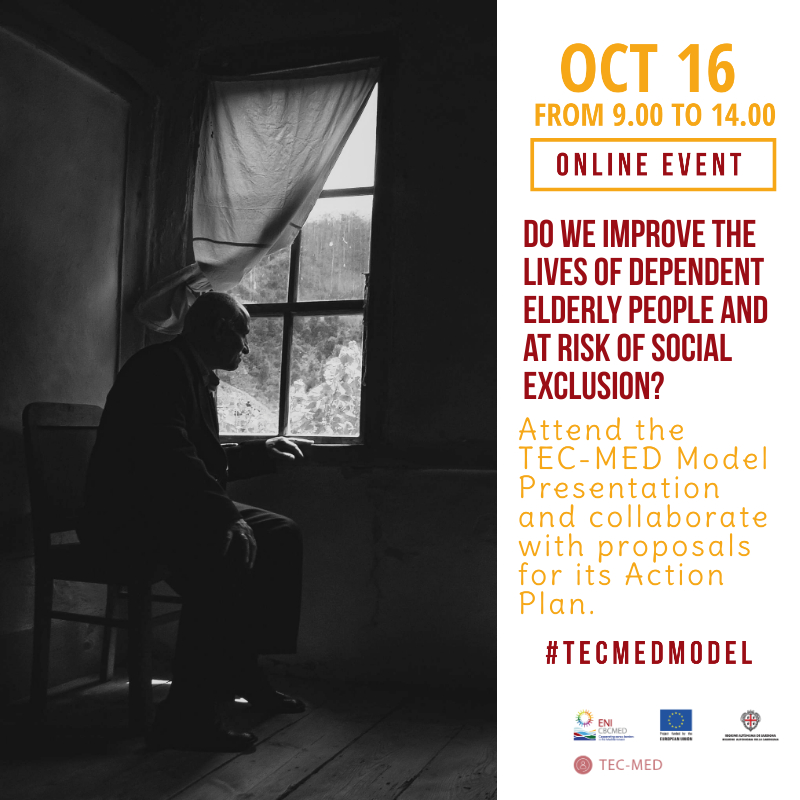 TEC-MED workshop in Seville, Spain - Improving the life of elderly dependent or in risk of social exclusion

TEC-MED organizes a national event on 16thOctober 2020 in Seville (Spain). The University of Seville, coordinator of the project, will organize this meeting in which the most relevant actors in the field of aging, social care, ethics and transculturality in Spain will participate.

The aim of the event is to present the TEC-MED Model, a transcultural social-ethical-care model for elderly dependent or at risk of social exclusion in Mediterranean basin and collaborate with proposals for its Action Plan.

The first part of the event will be for the presentation of the TEC-MED Model and outline the basic lines of the Action Plan.

The second part of the event will be a workshop with the attendees establishing a networking learning community among different actors and collaborating with proposals for the TEC-MED Model´s Action Plan.

This event can be attended in person (Seville) or online. Registration for the conference is free and participation is open to anyone who requests it. The workshop will be held in Spanish.

TEC-MED MODEL: HOW IMPORTANT IS ITS DEVELOPMENT FOR THE MEDITERRANEAN COUNTRIES

Nowadays, 200 millions of people in the world have reached or surpassed the health life expectancy (60 years) that is the 12% of the world population. These figures will increase in the following three decades, where people older than 60 years old will duplicate in number, and octogenarians will quadruplicate (World Health Organization, 2020).

In accordance to the current demographic development, over 50 million people in Europe have more than one chronic disease, and over 100 million are at risk of poverty or social exclusion.

The World Health Organization identified some key components of well- functioning health system, responding in a balanced way to a population’s needs and expectations by improving the health status, protecting people against the financial consequences, and providing equitable access to person-centered care.

The TECMED research project of the ENI CBC 2014-2020 call addresses these challenges, developing a model of cross-cultural, ethical and social care for the dependent population in the Mediterranean basin. With an approach based on justice, privacy, confidentiality, gender, universal accessibility, active community participation and the values of the welfare state and governance.

WORKING TOGETHER FOR TEC-MED MODEL

Before the development of TEC-MED Model, the project has carried out the following research activities:

All the countries involved in the project have developed these research activities. Thanks to this analysis, the TEC-MED Model proposal can take into account the strengths, obstacles and possible tools to solve this gap presents in the Social Care System in all these countries.