Together for the Planet: ENI CBC Med Programme at European Union side event during COP26 Climate Change Conference 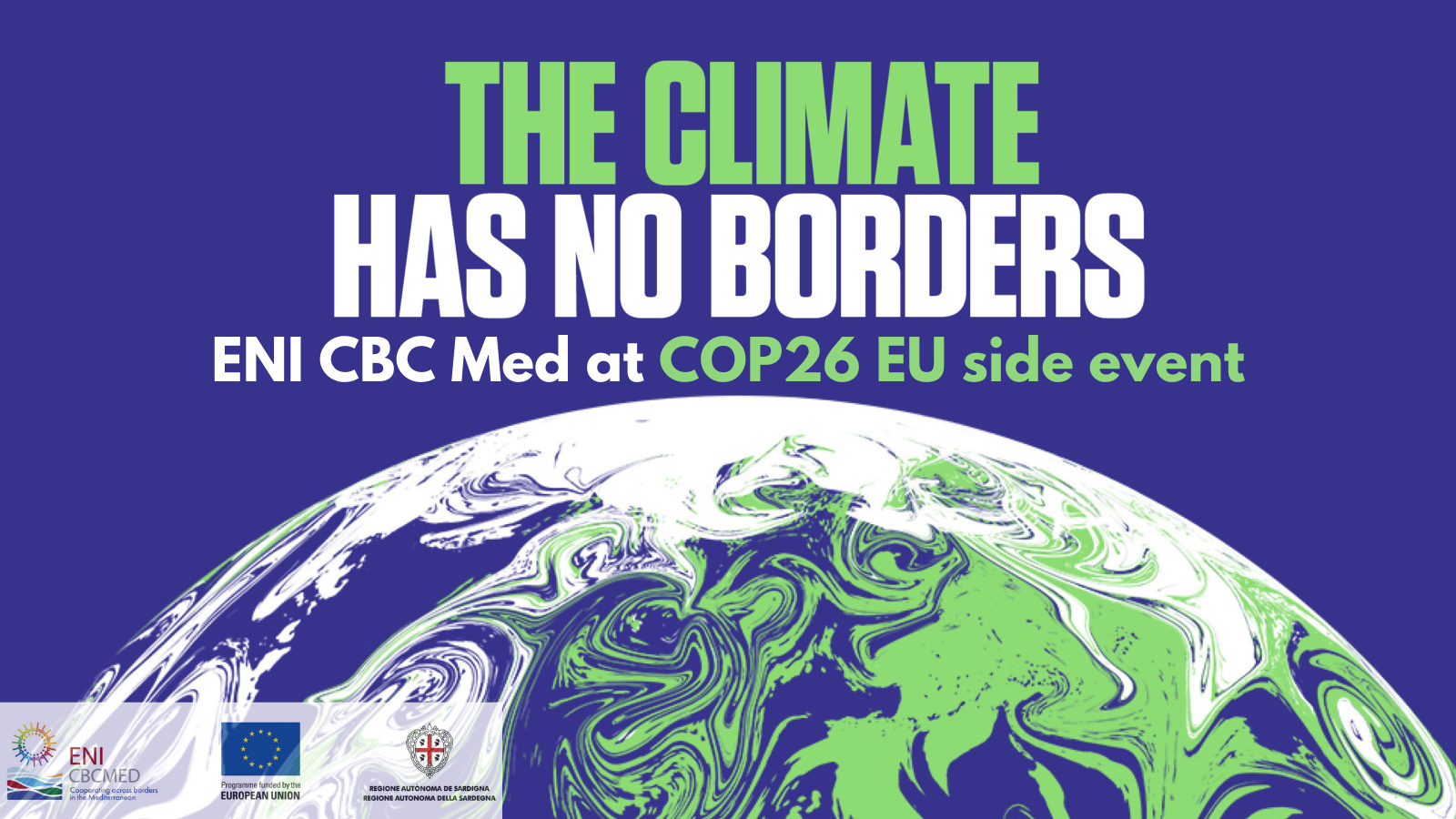 Join us on 9 November (6.30 pm-7.30 pm, CEST) for a session on climate & energy action organised as part of the European Union official programme of side events at COP26, the 2021 edition of the United Nations (UN) global climate summit.

We are happy to announce that the ENI CBC Med Programme will be featured at COP26 as part of the digital side events to be held in the framework the European Union Pavilion at the UN climate change conference which is taking place from 31 October to 12 November 2021 in Glasgow, under the presidency of the United Kingdom.

The ENI CBC Med Programme will be involved in the session “Racing to 1.5°: cities implementing evidence-based climate & energy action in Europe & Mediterranean”, scheduled on 9 of November (6.30 pm-7.30 pm, CEST), which aims to highlight the efforts of local governments and stakeholders in Europe and across the Mediterranean in accelerating climate action. The discussion will showcase impact-driven success stories of cities and local actors in climate and energy plans and concrete measures towards a resilient, climate neutral future.

The session is organized in partnership with the Global/Europe Covenant of Mayors for Climate and Energy - the largest alliance for city climate leadership across the globe; Clima-Med - the EU-funded project which supports the transition of eight partner countries in the Southern Neighbourhood towards sustainable, low-carbon and climate-resilient development; and the Italian Municipality of Segrate, a town of over 35,000 inhabitants located in the Metropolitan City of Milan.

Speakers include representatives of European Commission’s Directorate General for Neighbourhood and Enlargement Negotiations and Joint Research Center, cities and regions part of the Global/Europe Covenant of Mayors, the Clima-Med project, the Mayor of Municipality of Segrate.

ENI CBC Med Programme will be represented by Ms. Sorina Mortada from the Lebanese Center for Energy Conservation (LCEC), the organization in charge of leading the efforts of Lebanon in the development of Energy Efficiency and Renewable Energy to increase energy security and de-carbonization levels. In particular, Ms. Mortada will share the results of energy-efficiency related ENI CBC Med projects in which the LCEC is partner, namely BEEP (Building Information Modeling for Energy Efficiency in the Public sector), ESMES (Energy Smart Mediterranean Schools Network) and the newly funded capitalization project ‘SEACAP 4 SDG’ (Med SE(A)CAP integration through uniform adapted assessment and financing methods, mainly targeting buildings in education and health sectors, for sustainable development goals in a smart society).

Register now on the platform of the EU side events at COP26 - https://www.cop26eusideevents.eu/ - and look for the session 8.O.6 as shown below:

Environment
Events
Programme
Back to news