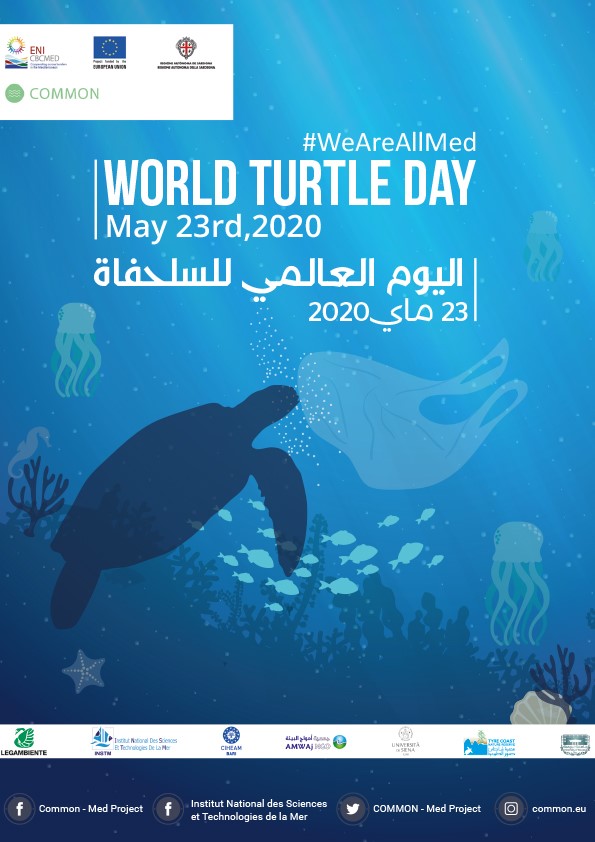 Celebrated every May 23, World Turtle Day is a great opportunity to promote knowledge and respect for turtles among public opinion and encourage initiatives that aim to protect and conserve these cheloniidae.

The initiative is sponsored yearly since 2000 by American Tortoise Rescue, to bring attention to, and increase knowledge of and respect for turtles and tortoises, and encourage human action to help them survive and thrive.

On this occasion, the team of the Intitut National des Sciences et Technologies de la Mer (INSTM), one the Tunisian partners of the COMMON project, will release 2 Caretta caretta turtles in collaboration with its Sea Turtle Rescue Center.

The event wants to raise awareness of the state of health and the main risks for these species, both long-lived and fragile.

The Caretta caretta is, according to the International Union for the Conservation of Nature (IUCN), an endangered species and marked as a particularly protected species. Human being represents one of the main threats to the survival of the species: respect for the environment is the first and fundamental step to take care of the inhabitants of the sea, including sea turtles.

Responsible tourism can extend the life of this long-lived and courageous species: it is necessary to avoid bathing tourism in nesting sites that can compromise the natural habitat and threaten the reproductive sites

The release will take plase in Monastir at the INSTM Turtle Rescue Centre, on May 21st at 11.00.