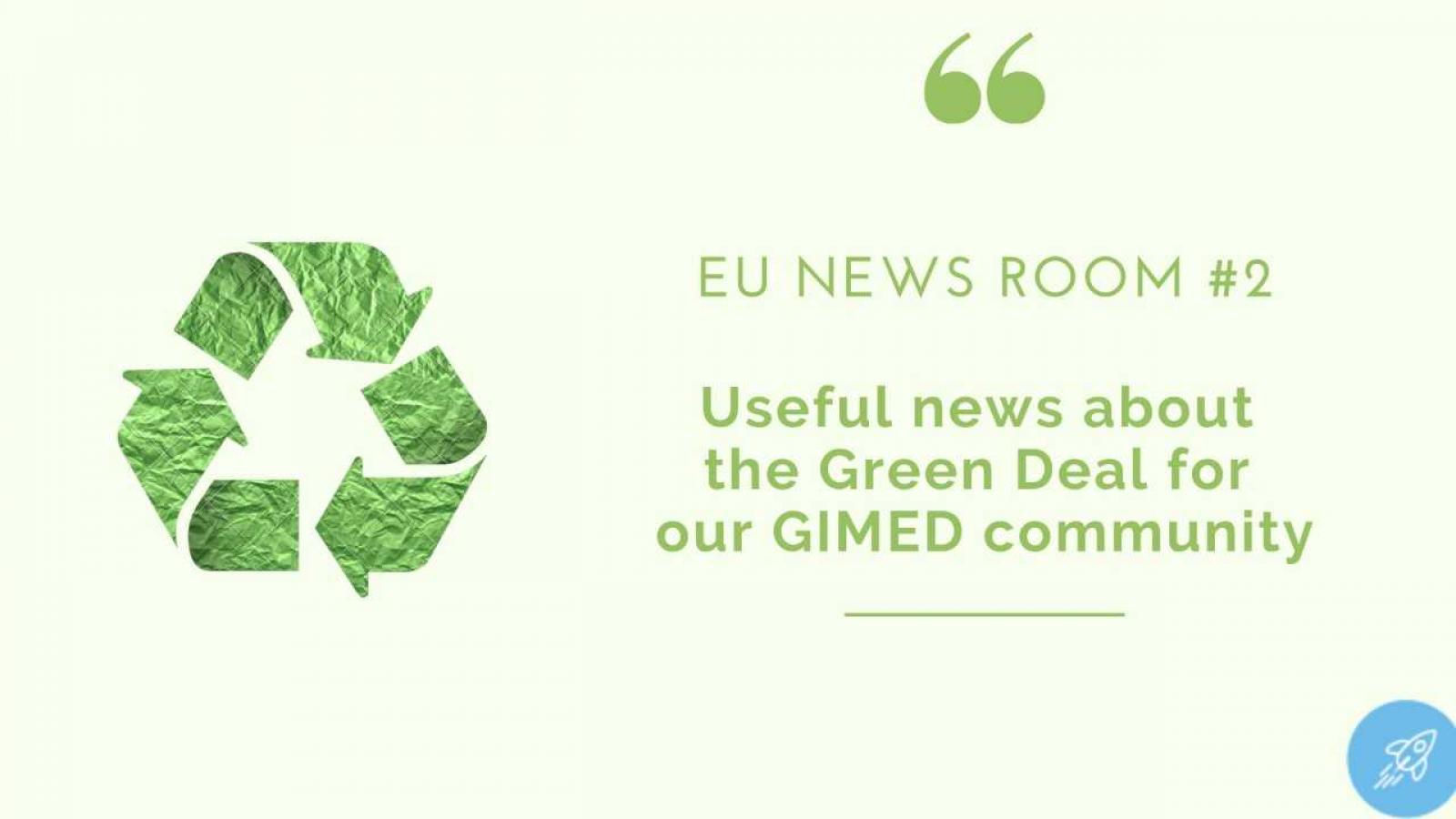 About the EU News:

The GIMED Green Impact Med project aims at boosting the development of green and eco-innovative entrepreneurs in 5 Mediterranean countries (Egypt, Italy, Lebanon, Palestine and Tunisia) by  creating the required environment and improving knowledge base to better access finance and markets, creating jobs and driving the green and circular economy in the region.

With an important investment in green and circular economy committed through the European Green Deal, the European Union is today the frontrunner to become the first carbon neutral economy by 2050. With the aim of keeping you updated on the Union’s strategy to become a more resource-efficient and competitive economy, we will publish a monthly EU news  to share useful news about the for our GIMED community.

In April we had a closer look on how much the new EU Green Deal will cost and what is in the EU pipeline to finance the transition to a green Europe and its commitment to become the first climate-neutral continent in the world by 2050. We closely looked at the European Green Deal Investment plan and the Just Transition mechanism to mobilize public and private funds to reach the objectives of the European Green Deal. This month of May we will have a closer look to the two main financial instruments to implement the Sustainable Europe Investment Plan: the EIB, the European Investment Bank on one hand and the InvestEU program on the other hand. We will analyze their specific roles in the framework of the EU’s green transition and its support to the circular economy.

The European Investment Bank has been Europe’s climate bank for quite a time. Since 2012, the EIB provided EUR 150 billion of finance supporting EUR 550 billion of investment in projects that reduce emissions and help countries adapt to the impacts of climate change. This made the EIB one of the world’s largest multilateral providers of finance for projects supporting these objectives.

But since the announcement of the Green Deal by the new Commission the EIB decided on enhanced new ambitions for climate action and environmental sustainability.

What are the key elements of EIB’s increased climate ambition?

The EIB Board of Directors confirmed the EIB’s increased ambition in climate action and environmental sustainability. This includes three key elements:

The other main financial instrument to implement the European Green Deal is InvestEU:

InvestEU was proposed in June 2018 as part of the future long-term EU budget. It focuses broadly on investing in Europe and supports four policy areas: sustainable infrastructure; research, innovation, and digitization, small and medium-sized businesses; and social investment and skills. It is part of and complementary to the European Green Deal Investment Plan.

How InvestEU Fits into the European Green Deal Investment Plan

InvestEU will dedicate at least 30% of mobilized investments to climate- and environment-related projects. It also contributes to the Just Transition Mechanism with a new dedicated InvestEU scheme to mobilize €45 billion of sustainable investments in the regions with high carbon intensity.  InvestEU also plays an important role in addressing two of the major challenges of implementing the European Green Investment Plan: developing a pipeline of investment projects that respond to the strategic objectives of the EU and monitoring that the projects funded are truly sustainable.

The InvestEU Advisory Hub and the advisory initiatives developed under InvestEU will help identify, prepare, develop, structure, procure, and implement investment projects aligned with the objectives of the EU Green Deal.. The InvestEU Portal will continue to offer a free, online tool that helps EU businesses and project promoters raise their profile and network with investors globally.

Ensuring that the investments funded are truly sustainable and truly green is critical.

The EU can only become climate neutral by 2050 with an enhanced, robust reporting and monitoring system. InvestEU will play an important role in promoting sustainability practices among financiers and project promoters by setting standards—informed by the EU taxonomy—for tracking climate-related investments and assessing the environmental and social impact of projects. More generally, the Commission will hold an annual Sustainable Investment Summit with all stakeholders to measure progress on the European Green Deal Investment Plan and identify new needs for action.

Announcement of the month: