UN Ocean Conference: Legambiente, LB of the COMMON project, and the University of Siena together to protect the Mediterranean Sea 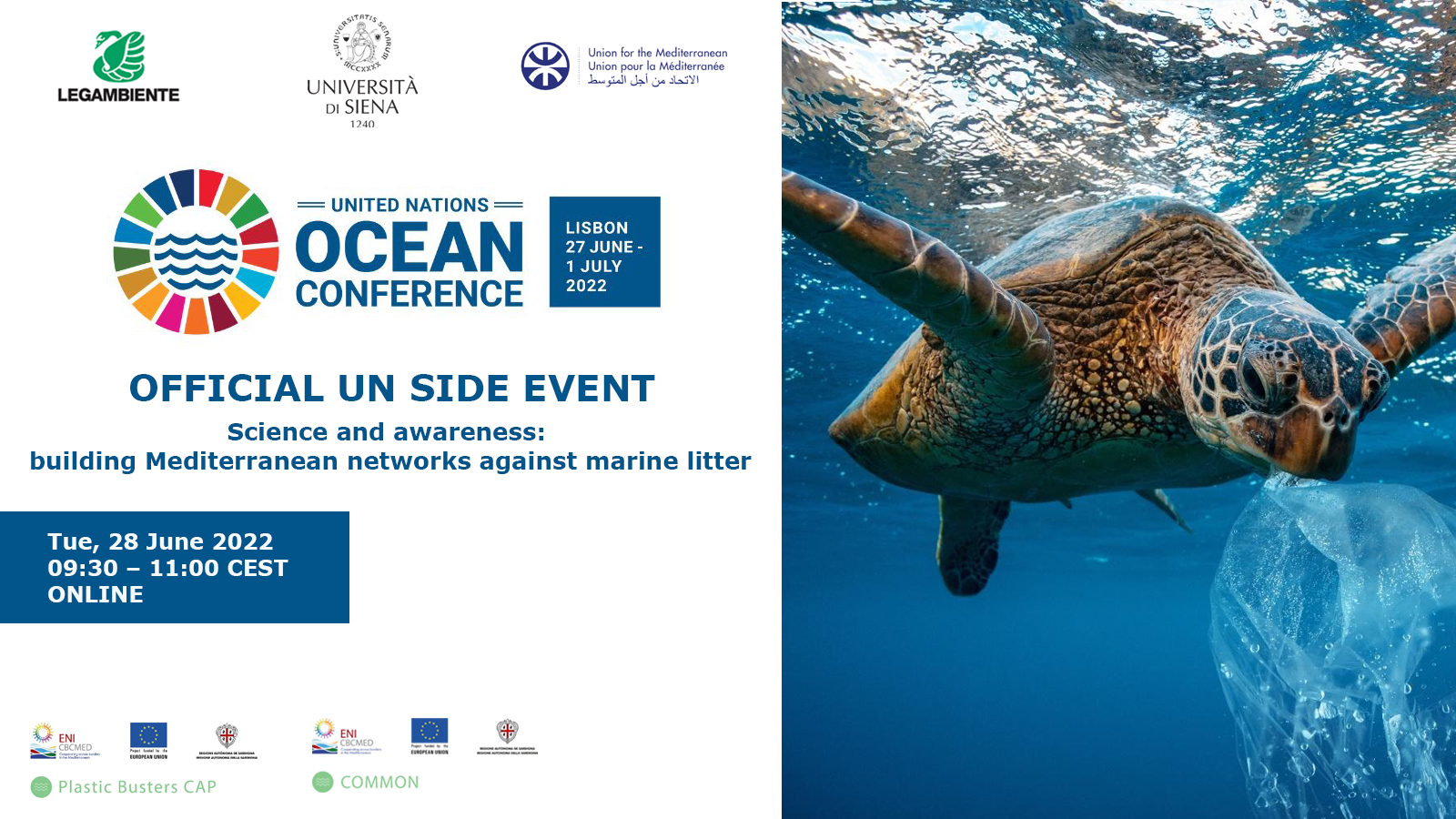 Though the Mediterranean only covers 0.7% of the world’s ocean area, it is one of the major reservoirs of marine and coastal biodiversity, with 28% of endemic species, 7.5% of the world’s marine fauna, and 18% of its marine flora. This little semi-closed sea is rich in islands and underwater beds and is also a major area of wintering, reproduction, and migration.

During an official virtual side event of the UN Ocean Conference 2022, that took place in Lisbon from the 27th until the 30th of June, Giorgio Zampetti, General Director of Legambiente, in the wake of the commitment that Legambiente and the University of Siena jointly presented in 2017, outlined the goals that have been achieved so far in protecting the health of the Mediterranean Sea from marine litter.
The side event was co-organized by Legambiente (as Lead Beneficiary of the COMMON project – "Coastal Management and MOnitoring Network for tackling marine litter in the Mediterranean Sea"), the University of Siena (in the role of Lead Beneficiary of the Plastic Busters Cap project), and Union for the Mediterranean.

In his speech, Zampetti recalled that "One of the main problems in the Mediterranean Sea is that laws and regulations on marine litter are too complex and disjointed. Marine pollution threatens every country that overlooks the Mediterranean, so it’s crucial to develop common protocols and shared strategies; every country has to bring its own skills to a project that must have an international scope.
We believe that the Ocean Conference is an extraordinary opportunity to talk about it because, although our sea only covers 0.7% of the world’s ocean area, it is one of the major reservoirs of marine and coastal biodiversity, representing one of the most important biodiversity hotspots in the world, and, unfortunately, it’s one of the most affected by marine litter and microplastics pollution. This is what we have been practicing for many years with the Clean the Med campaign, involving thousands of volunteers along the entire coast of the Mediterranean".

The meeting, which aims to highlight the importance of cooperation in the fight against marine litter in the Mediterranean Sea, continued with speeches by Vincent Ernoux (coordinator of ENI CBC Med, a leading European program in the sphere of Mediterranean cooperation and contributor of the COMMON and Plastic Busters CAP projects), Heleni Hatziyanni (policy officer DG MARE), Francesca Marcato (project manager Interreg Program), Claudia Pecoraro (policy officer of the European Union), and Sana Ben Ismail (professor at INSTM, Tunisian partner of the COMMON project).

In her speech, Maria Cristina Fossi, professor at the University of Siena, coordinator of the Plastic Busters CAP project and partner in the COMMON project pointed out that "The increasing urgency and complexity of interconnected societal challenges, such as marine litter, requires that they be addressed by strengthening the science, policy and society interface, to provide the necessary conditions to translate research-based knowledge into effective action. Furthermore, the impact of waste ingested by marine organisms should be assessed through integrated monitoring, both on commercial and protected species. Among all the species we have observed and analyzed with the COMMON project and Plastic Busters CAP, we have detected a very high number of macro and microplastics in 46 of them, from invertebrates to marine mammals.
From the research that is emerging, it appears that the level of plastics pollution, in most of the marine areas examined, is significantly higher than the threshold level suggested by the Marine Strategy: 20 objects per 100 linear meters. This underlines the seriousness of the basin-wide problem related to the global circulation of this pollutant."

Alessandra Sensi, Head of the Environment and Blue Economy sectors at the Union for Mediterranean (UfM) Secretariat, concluded the event by stating "The message is very clear: the Mediterranean is a precious asset, environmentally and economically. It is of vital importance for the countries of the region and must be protected through transnational cooperation. We must work as a system, as a team, using the same language. We all must play together and point in the same direction, to tackle marine litter in a coordinated manner so that everyone - within the mandate, skills, and role – can contribute to a common goal. Special thanks to Legambiente and the University of Siena for organizing this important contribution to the UN Ocean summit".

We thank all those involved in this side-event, the speakers, and of course the audience!

Here you can find access to the full UNOC 2022 official virtual side event recording.