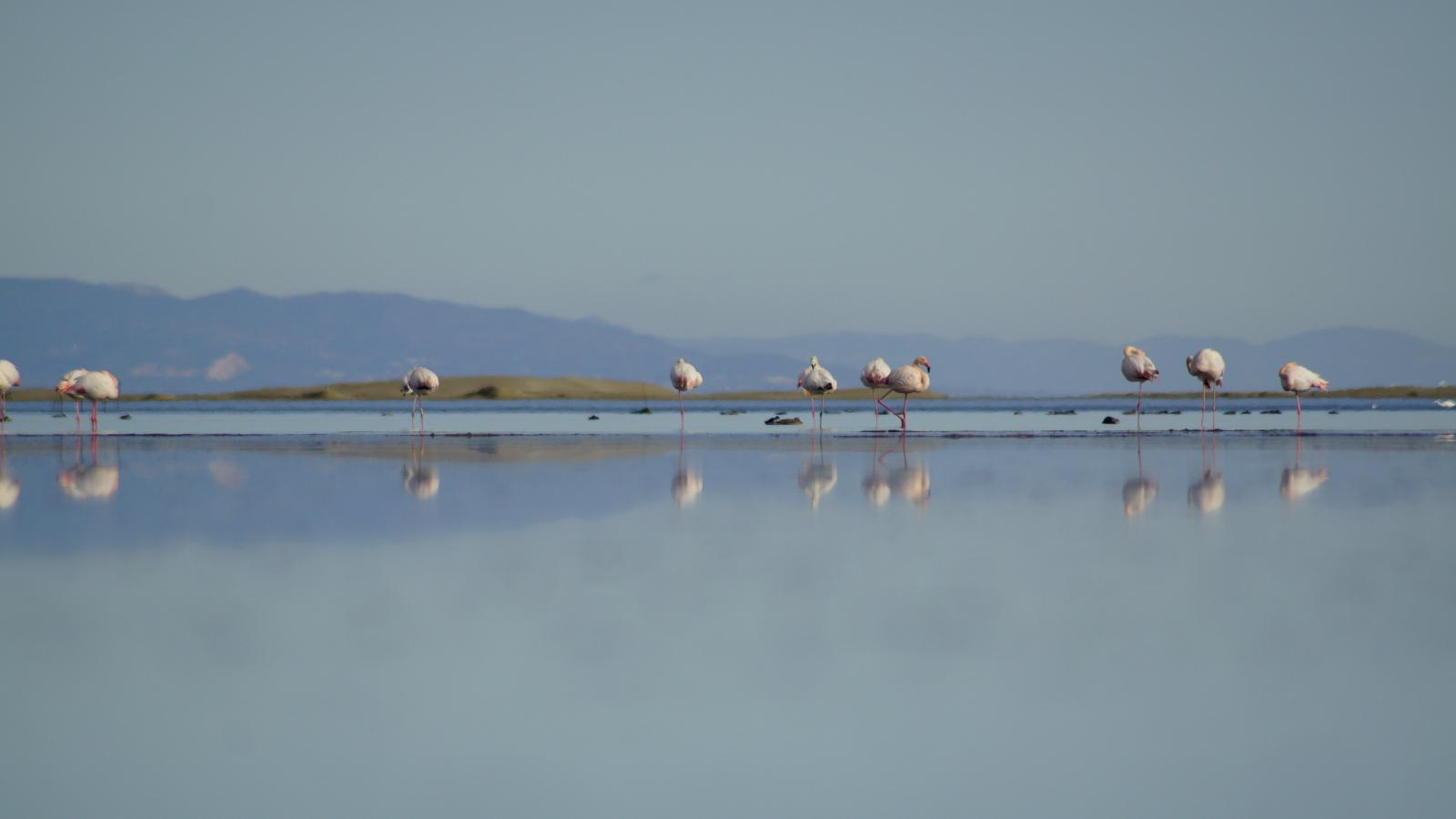 Catalonia is probably best known for its capital city Barcelona, not least due to its world-famous football club popularly known as “Barça”. But the region located in the north-eastern corner of Spain has much more to offer. With its 7,5 Million inhabitants and roughly 32.000 km2 surface, it may appear small, but it is enormous when it comes to its natural wealth. Its privileged location bordering the Pyrenees in the north, and its 528 km of Mediterranean coastline make it rich in landscapes, flora, and fauna. The relatively close distances render Catalonia an easy to travel destination, where on the same day you can climb its highest mountain peak Pica d’Estats of (3143 m) in the Pyrenees and dip into the crystal clear Mediterranean Sea at one of the region’s splendid beaches.

In the Catalan part of the Pyrenees there are three more peaks over 3,000 m height: Pico Verdaguer (3,129 m), Punta Gabarró (3,105 m) and Besiberri (3,029 m). The mountain massif furthermore encloses the national park Aigüestortes i Estany de Sant Maurici, a true expression of nature’s splendour. Speckled with nearly 200 lakes and numerous streams and spectacular crags, the terrain is home to more than 5,000 species of fauna. Across 16 ski mountaineering stations, among them 10 Alpine ski resorts and 6 Nordic ski resorts, the Pyrenees offer plenty of outdoor activities all year round. From skiing and snowshoe trekking in the midst of unspoiled nature to hiking and climbing, there is no way to get tired of exploring the slopes of this giant natural border to France. 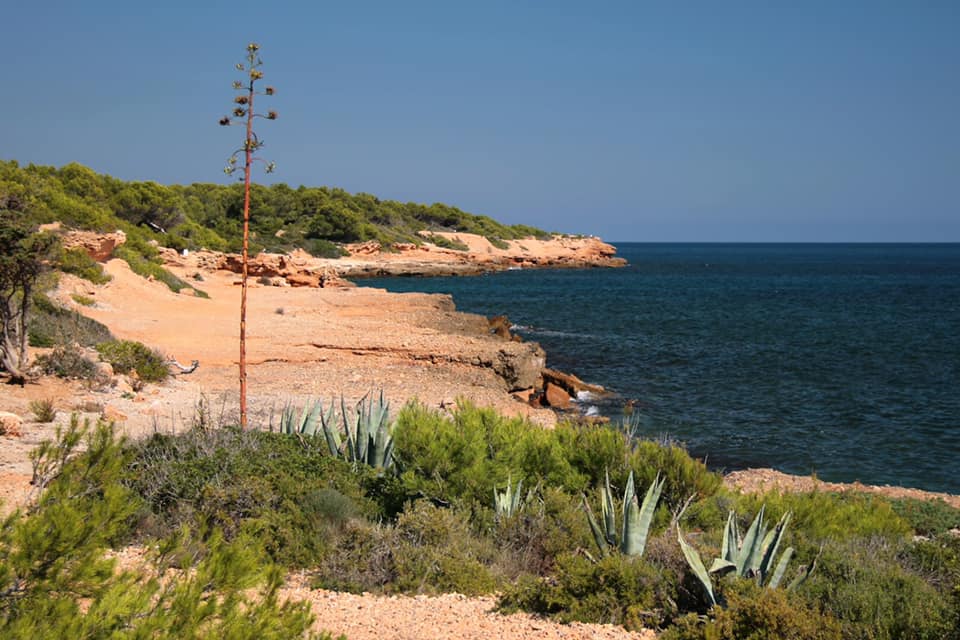 Next to its unique national park, the territory contains two Biosphere Reserves. One being Montseny, located a one-hour car ride towards the inland from Barcelona, where a large beech wood spreads over lovely hills and turns them into a sea of colours during autumn period. The second one, Terres de l’Ebre, the river delta zone of the Ebro, famous for its rice cultivation in the shallow flooded fields and an extraordinary ornithological wealth, including a flamingo population making it predestined for bird-watching.

Thanks to its 9.000 km of paths and walking tracks throughout the whole territory, one can cross it from north to south and east to west on foot. For those who prefer pedaling, an extensive network of cycling lanes and greenways, as well as signposted itineraries for mountain and downhill biking including 16 specialized MTB centers, leave nothing to be desired by bicycle enthusiasts. As for the distribution of the territory, it is cover 64% by forest and diverse vegetation, 26% is cultivated land and 6.4% are urbanized areas and structures. Over 30% of its territory are protected areas including 15 natural parks, where flora and fauna are exhibited in their natural habitat, a real paradise for nature observers and eco-tourists.

When it comes to Catalonia’s coastline, 208 km of it are cliffs with gorgeous views from walking and cycling trails over the sea and a light breeze during summer months as well as hidden caves carved into the rugged coast of the Costa Brava to be explores by Kayak from the seaside. Among the incredible 280 km of beaches, there are sand dune beaches, tine solidary bays and vibrating city beaches to be found. Next to diving and snorkelling the marine seabeds – most famously around the Islas Medas - other water sports like kitesurfing can be practiced at the windy spots of Sant Pere Pescador (north), Castelldefels (center) and Riumar (south). The remaining 40 km of the coast are ports, where 44 marinas, more than 30,000 moorings and 6 water sport centres offer endless possibilities for nautical and other water sports. But also the inland of the region has plenty of amazing sites to discover. La Garrotxa, volcanic mountain zone, for instance offers perfect conditions for paragliding or ballooning over its lovely hills down the valley. For those with a head for heights, the impressive gorge of Mont-rebei can be walked along on a path carved into the rocks some 40 m above the turquoise riverbed or drifted downstream by canoe. As a contrast to this calm waters, rafting in the fast-water rivers at Llavorsí or Baro are an adrenalin guarantee for adventurers. Penedés and L’Empordà, the two mayor wine growing areas of Catalonia, on the other hand, impress with a soft sun-drenched landscape of fresh green in spring when the vine sprouts and golden and ocher tones in autumn at the time of harvest. An evening walk through the vineyards of Penedès, across dry stone walls and olive trees when the sun goes down behind the sacred mountain of Montserrat is a simply unforgettable moment. 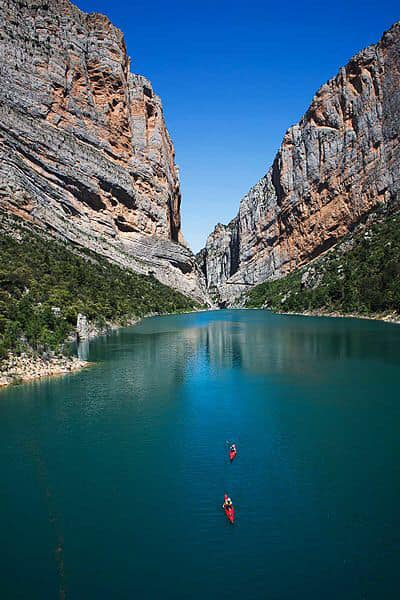 Last but not least Catalonia convinces with its typical Mediterranean climate, meaning mild winters and hot summers. Due to its topographical variety even during summer months there are chilly spot to be found in the mountainous areas, while in the interior province of Lleida it gets hot and dry. Rainfall is usually concentrated between May and June, whereas generally the climate is rather dry and rainy days are rare around the whole year. Even on a cloudy day, regardless of the time in the year, a sunray will always find its way through the clouds onto the lavish beauty of this region’s lands.