The Ministry of Public Works and Transport of Lebanon, partner of Co-Evolve4BG project, took part in the group of experts consulted by the Union for the Mediterranean

The Union for the Mediterranean (UfM) adopted the 2nd Ministerial Declaration on Blue Economy last 2nd February 2021, demonstrating its commitment to promote transformative policies and tools through cooperation.

Ministers from the 42 UfM countries met virtually and agreed on a new Declaration. The Declaration is a result of a broad consultation, to which more than 100 experts and representatives from international organisations have contributed. This large participation reflects the growing interest in sustainability in and around the Mediterranean, and the shared understanding that more actions are urgently needed.

The Ministry of Public Works and Transport (MPWT) of Lebanon, partner of Co-Evolve4BG project, was part of a group of experts consulted by the UfM for "Cross-sectorial planning and Integrated Territorial Development (ITD) applied to sustainable tourism". Two meetings have been held so far and a report on sustainable blue tourism was drafted, discussed and is currently under finalisation,  a package of capacity building training on Blue Economy is also being identified with the participation of the main stakeholders. 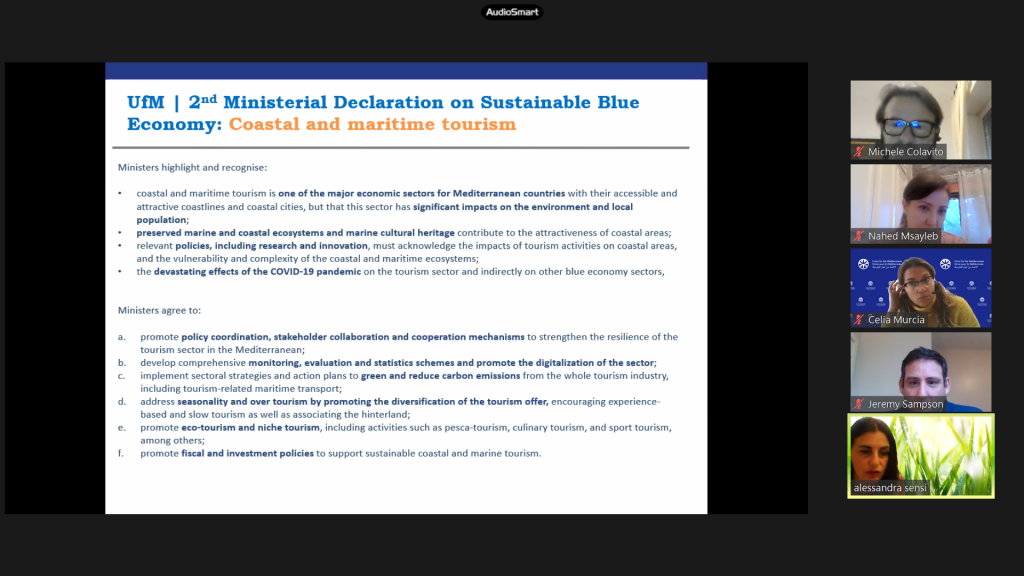 The last meeting took place on 18th February 2021. During this meeting, Dr. Nahed Msayleb, project manager of MPWT and partner of the Co-Evolve4BG project, presented the studies currently being conducted under the scope of Co-Evolve4BG for the evaluation of threats and enabling factors on the sustainability of blue tourism at the national scale by each of the project partners, and the assessment at the Mediterranean scale that will emerge out of the analysis of all the national reports, followed by further studies at pilot areas scale.

The Union for the Mediterranean (UfM) is the intergovernmental Euro-Mediterranean organization gathering, on equal footing and representation, all 27 countries of the European Union and the 15 countries of the Southern and the Eastern Mediterranean shores. It reflects the shared political commitment of its 42 Member States to strengthen regional cooperation, dialogue and integration in the Euro-Mediterranean area. The Ministerial Declaration on the Sustainable Blue Economy is one of several UfM initiatives aimed at advancing regional and sub-regional cooperation by supporting integration and partnerships within shared objectives.

Co-Evolve4BG project supports through its activities the implementation of the UfM Ministerial Declaration on Blue Economy and reflects the joint priorities identified and agreed by the UfM member countries.