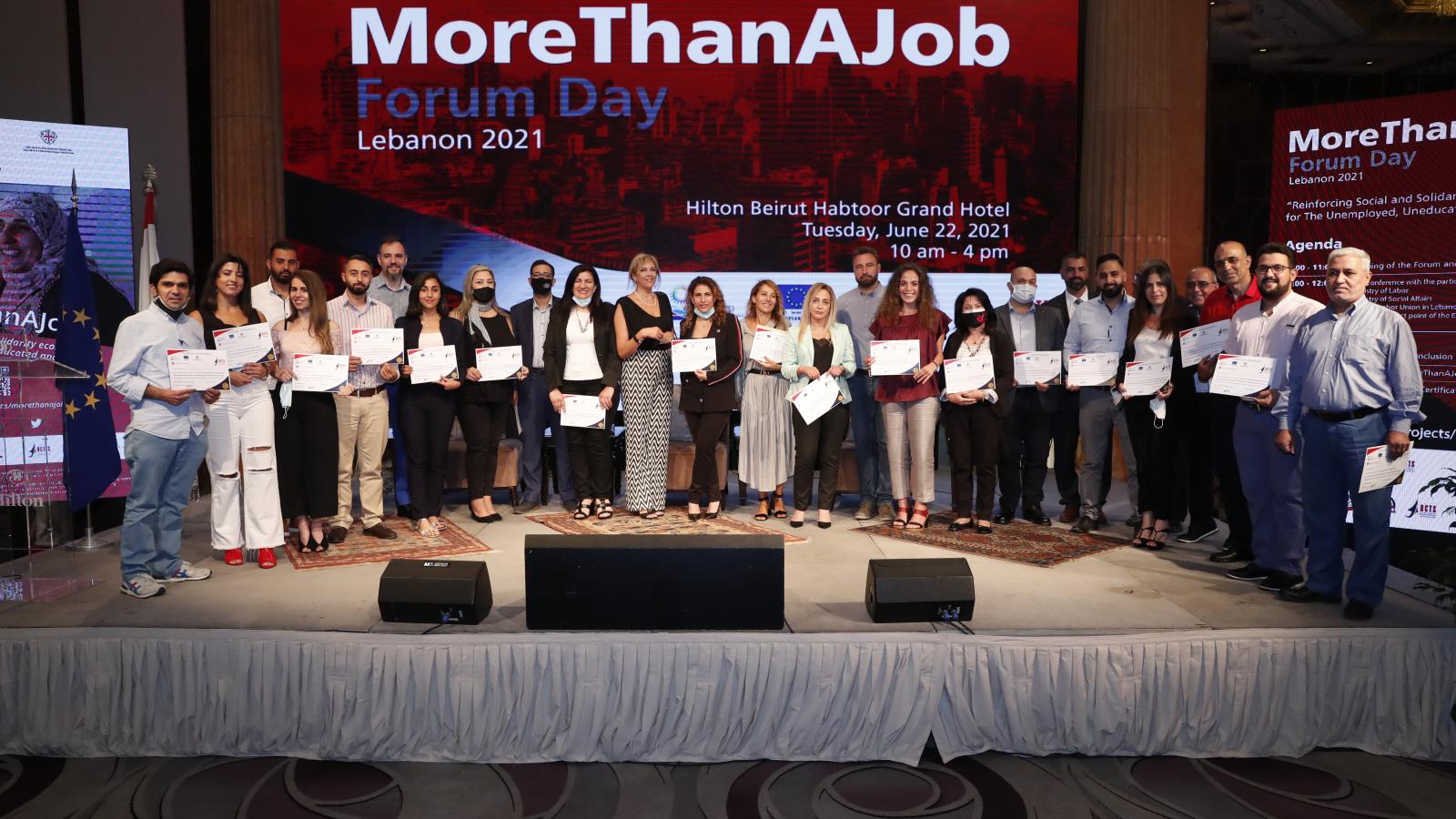 As MoreThanAJob project entered its second year of implementation, Business Consultancy and Training Services (BCTS), its Lebanese partner held a forum to discuss the latest developments of this project about “Reinforcing Social and Solidarity Economy for the Unemployed, Uneducated, and Refugees”, to exchange on the ongoing tasks, and prepare the next project activities which were impacted by the Covid-19 crisis. The event was held under the patronage of the Ministry of Labor and in cooperation with the General Labor Union (CGTL) in Lebanon and the participation of the Ministry of Social Affairs as well as the National Contact Point of ENI CBC MED Programme which funds this project.

The participants discussed with the audience the latest achievements, and obstacles of MoreThanAJob project and its achieved results including, designing and holding meetings with Social and Solidarity Economy (SSE) actors, preparing a report on best practices in social schemes to the benefit of unemployment of vulnerable populations; preparing a report on MoreThanAJob framework of social schemes and guidelines for its implementation; holding "Train-The-Trainer" workshops; organizing training seminars for SSE actors in each partner country;  holding training seminars for public authorities in the field of employment, education, and migration; the development of MoreThanAJob e-portal; launching of subgrants competition of collaborative projects between actors of the Social and Solidarity Economy; holding meetings with public administration representatives/policymakers, and introducing new and improved social inclusion policy suggestions.

Due to the Covid-19 pandemic, some field activities have to be adapted to cope with the delays. Dr. Wafaa Haidamous, the Managing Director of BCTS who planned the “MoreThanAJob forum”, noted that "the project has inspired people to believe that Lebanon is an end goal. A country that will not perish even in the difficult economic, social and medical conditions that we live in".

She also briefly presented the objectives of the project, which began in 2019 and will continue until September 2022. She focused on the importance of recommendations to adjust the social inclusion policies, provided that the public and private sectors cooperate, the two "Subgrants” that will be granted to the best project in each country with a value of 20,000 Euros for each project, abiding by the formerly declared conditions. The results will be announced between August and September 2021. 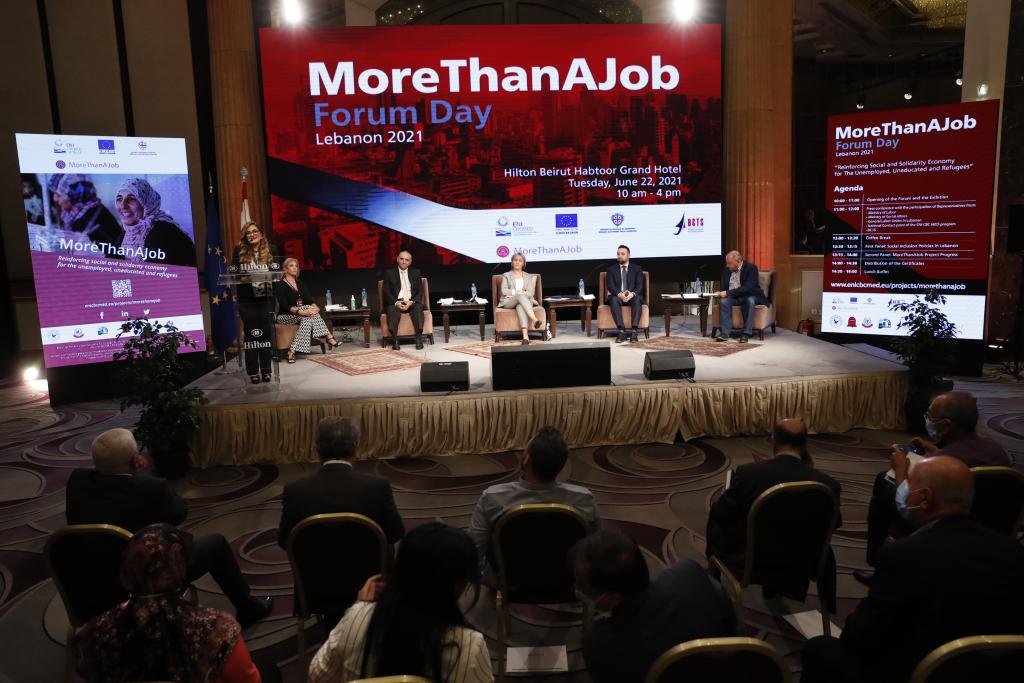 It is worth mentioning that the forum included two panels of discussion. The first panel titled "Public policies for social integration in Lebanon: its importance, reality, and ways to develop them" discussed the national policy to empower individuals and groups from diverse backgrounds to accomplish: Family and income support | Health and counseling services | Education and training | Career guidance and employment support | Culture and participation, and other life goals through peer-to-peer counseling programs which have been worked on by the Ministry of Social Affairs, and Education and Higher Education.

Also, the panel discussed several topics, most importantly is how the Ministry of Social Affairs and Ministry of Economy and Trade is promoting community service intervention with the aim of involving young Lebanese in income-generating activities. Furthermore, the participants pointed out that the ministry of Economy and Trade is supporting newly established social enterprises by contributing to their administrative and financial development and increasing their social and environmental impact by all possible means.

The second panel titled "Evolution in the “MoreThanAJob” project in Lebanon and partner countries" included presentations on the progress of the project in 5 countries given by Dr. Imad Ibrik- Project Coordinator from An-Najah University, Lead Beneficiary of the project, CEISIE, the Italian Partner and Dr. Esmat Alkaradsheh, coordinator of the ENI CBC MED Program Branch office for the Eastern Mediterranean, Aqaba.

Among the several issues discussed, special attention has been given to identify MoreThanAJob Project, its general framework, and main priorities which are based on the collaboration of Social, and Solidarity Economy, and public authorities' actors for delivering their services in a more effective way. This will be done through pilot sub-projects aiming to ensure a long-term impact and the creation of jobs.

Furthermore, the project Portal and its crucial role in applying for the sub-grants call launched by the project two months ago, and the social schemes were outlined and delivered in a simplified way.

A discussion on how the project's activities could best be adapted to the current situation without postponing any tasks in the work plan has been conducted. Finally, certificates were awarded to the trainees from the Social and Solidarity Economy(SSE), and Public Administrators(PA) actors who delivered training in the application of a MoreThanAJob framework of best practices developed by the project.

Participants had the opportunity to visit the booths of the participating organizations and institutions from different NGOs and institutions working under ENICBCMED Programme projects such as MYSEA, GREENLAND social inclusion projects, Al Moasat Association, Alpha Association, Chiyah Municipality, and Together for Lebanon’s Future Foundation(TLF) under the initiative of the European Union to achieve coordination and unity between them.