Photo taken by Gemma Sánchez and appeared on Lavanguardia newspaper

This article forms part of a series of publications under MEDUSA project to promote less-known natural and cultural touristic assets in our partner territories Jordan, Lebanon, Tunisia, Puglia (Italy) and Catalonia (Spain).

Enjoy reading and hope to welcome you soon at one of the wonderful places you will get to know here.

Human beings have always left footprints in their natural surroundings. For this reason, territory and its natural resources are the first things to look at to understand the history of a civilization and its relationship with the nature.

The Parc dels Talls in Catalonia offers a unique landscape created by the hand of human being, a testimony of a coexistence that started in the Roman Age and it has continued until the present day. Located in the municipality of Vilobí del Penedès, it is an area with particular environmental characteristics composed of five small lagoons – pèlags, in Catalan language – each with its own peculiarity.

This unique landscape is the result of mining that had been done over many years in the municipality of Vilobí. According to historical documents, this territory has been associated with this type of exploitation since the High Middle Ages (11th century), although certain traces can be traced back to Roman times.

During the 20th century, the plaster industry grew remarkably due to the construction sector’s growing demand. In the 1960s, the two main gypsum-making companies in the town merged and created the Vilobigyps SA brand, which operated for approximately twenty years. In 1992, largely due to the entry of water that began to fill the holes generated, the company abandoned the mines. 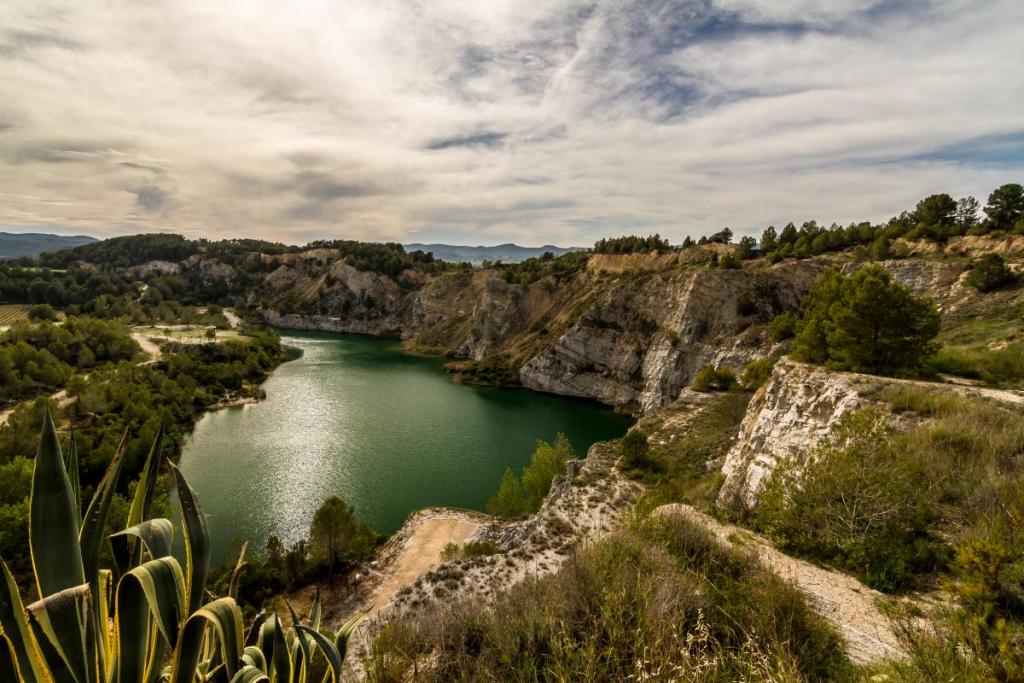 "Rarely does nature return the effects of human action with such generosity and beauty," someone said to describe what would happen in the following years.

In a short time, the open-pit mining, blasting, and rock extraction, created the five lagoons and the cliffs where they are embedded, some with more than twenty-five meters of unevenness.  Moreover, this natural process has had a positive environmental impact as a result of the effect of human action, a gift to appreciate and preserve.

That is why, in 2016, the Parc dels Talls was included in the Inventory of Humid Areas of Catalonia, and now it is part of a protected area that offers a wide range of authentic adventure activities.

These include cycling, trekking, birdwatching, or just a picnic enjoying the view. Furthermore, the Pèlag Gran del Parc dels Talls is a real tourist spot that can be admired from a series of viewpoints and bird-watching points.

Finally, this trip is a good option for those looking for an enriching experience in which they are immersed in nature and culture, the perfect combination for discovering a hidden place – unknown even to locals – full of secrets and surprises that only nature can provide.