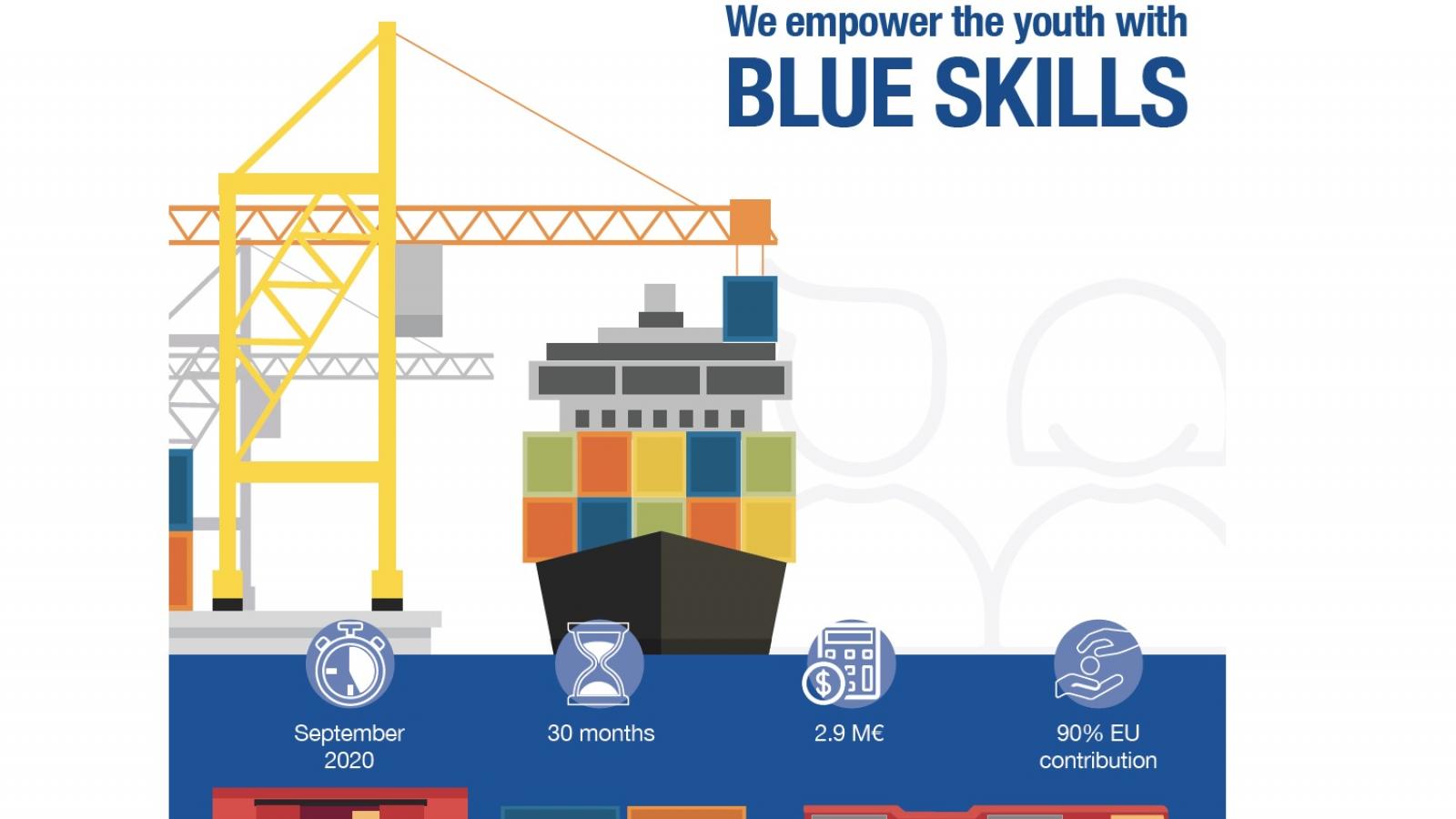 Winning a European project in a competing call is excellent news. In 2020 the Escola Europea presented and won the project YEP MED (Youth Employment in Ports of the MEDiterranean) in the Call for Strategic Projects of the Cooperation Programme with neighbouring countries of ENI CBC Med (European Neighbourhood Instrument Cross-border Cooperation in the Mediterranean). The thematic objective of the programme is the promotion of social inclusion and the fight against poverty through the promotion of economic and social development; the specific priority is to provide skills to help young people, school leavers and women in particular, to find jobs.

With a budget of approximately 3 million euros, a 30-month implementation period, 7 countries, 8 port communities and 11 partners, the project obtained the highest score in the selection process, in competition with 198 projects submitted to the Call for Proposals, making it a benchmark for the programme.

The idea for the project was set in motion in 2019 within the framework of the training and employment working group of the MEDPorts Association, led by the Port of Barcelona, which brought together large ports in the Mediterranean basin. It gained its seeds from the current realities facing the actors, which was that ports, which are linked to international trade, environment and sustainability, digitalisation, port logistics and transport networks, were one of the main focuses of job creation in the sectors of the Blue Economy. In addition, the port ecosystem has a high concentration of companies that tend to be larger than in other sectors, allowing for a higher absorption capacity of jobs. This potential could be better exploited through dual technical and vocational training with job-oriented internship schemes that target young job seekers in the Mediterranean region. Once the seeds were planted, the project slowly took shape.

Faced with this great challenge, the proposal of the YEP MED project is to enrich technical and vocational training opportunities by further developing four main common areas that face a shortage of skills: foreign trade, environment and sustainability, digitalisation and port logistics operations.

The project set itself ambitious objectives:

March 2020 became a month for the history books. Following the footsteps of (by then) numerous local and national governments in Europe, on the 16th of March 2020 an official COVID pandemic containment was declared in Catalonia. All teaching activities at the Escola Europea were suspended. We began teleworking. A similar pattern followed in the other countries participating in the project: the rest of Spain, Italy, France, Tunisia, Jordan, Egypt and Lebanon. Port traffic plummeted, in particular that of cruise ships, ferries and automobiles.

Within a few weeks the original premise for the project had evaporated. The start of the project was delayed to find a better time – one by which (hopefully) the situation would have normalised by. Unfortunately the virus showed little signs of subduing by the summer of 2020, and all the forecasts were overtaken by the reality of continuing with very restrictive mobility measures. During this period, the whole team began working to look for alternate designs for YEP MED, intending at all times to maintain the general objectives of the project. Some key issues that were tackled were:

2020 wasn’t done yet. On the 4th of August a terrible explosion destroyed a large part of the port of Beirut and damaged many of the buildings in the port area. The Beirut Port Community is one of those involved in the project through the Chamber of Commerce of Beirut and Mount Lebanon, and thus the tragedy was felt by one of its key players...

This event brought some dark thoughts to us. The sad reality that some situations could always be worse than we can imagine led to the conclusions that perhaps sometimes completing a project may not be the best option if its design was already complex and was further entangled in events out of the partners’ control. It seemed unlikely that YEP MED would end up being a success.

Fortunately, the partners’ general reaction was one of encouragement. With a newly moulded idea the reality hit – all of 2020’s consequences proved to create the best time to do the project. The port communities, hit hard economically as a result of the nation-wide lockdowns, would need more help than ever to generate employment and to find skilled people for those jobs. COVID-19 brought something unexpected. The processes of digitalisation in the companies of the sector reached exponential heights – something that we have never imagined. Everything was and still is new. Some trends have declined, whereas new ones have popped up -  and one thing is for sure: that there is still a lot to do.

In November 2018 the online show Impact Theory interviewed historian and philosopher Yuval Harari. He was asked what kind of education should be invested in, and his answer was "emotional intelligence and mental balance, and these kinds of skills about how to keep changing, how to keep learning and reinventing yourself throughout your life". He offered an image as a comparison: "If in the past education was like building a house out of solid materials, like stone, and with deep foundations, now it is more like building a tent that can be folded up and taken somewhere else quickly and easily.

In some ways this sheds light on what needs to be done: training students for a different sector, one that is fully digitised and in some ways different. Focusing on developing digital skills can improve employability and help companies manage the transformation processes, and thus gain competitiveness in a new market that competes with new tools.

We set about developing a new educational model based also on the digitalisation of the learning process, using software that reproduces the new scenarios and in which the learner is the protagonist, developing the required competences by himself with the help of mentors.

We have rethought the concepts of person, team, class and group. Once migrated to cyberspace, physical limitations are no longer a problem – and thus we propose that the traditional small group can now be made up of all the countries and training centres participating in the project. The new format shows us that learning can be collaborative and networked, using all the tools that the Internet offers today. Suddenly email, WhatsApp, Zoom, Hangout, Google Classroom, Google Drive, and Dropbox became part of the course material.

The advantage of this new approach is that it combines theory and practice using resources in the Cloud, using SaaS (Software as a Service). This makes a computer with a browser and Internet access the only requirement for the students. That is precisely one of the things that the pandemic has brought. All of us have had to look for an alternative way to get online, no longer only relying on the traditional computer, but looking to gain access through smart devices that have flooded the digital market.

Suddenly, the project has mutated into something new, but which still managed to retain its initial essence in terms of trained and recruited students. A similar end result can be reached in terms of figures (figures are important when money is involved!) by a completely different route and with results that offer a much higher added value.

We designed a virtual world with virtual companies acting like real ones: learning becomes a game! Our shipping company (sdglines.com) provides regular shipping services between the ports participating in the project.

Our railway company (portrailway.com) provides regular rail transport services for containers and semi-trailers to central and north-western Spain and to the south of France. Our student-run freight forwarder/logistics operator (playforwarding.com) provides top-of-the-line, sustainable and environmentally friendly services. It has all become a magical world where we are not only talking about the port community of today, but of tomorrow.

Another surprise is that we have discovered that this platform can be used for simulation, and the future is simulation itself. We can test, experiment and model (among countless other activities that we have not yet considered). Along the way we have discovered that representatives from the whole sector, in some way, will have to go through our application, ranging from those who want to enter the workforce to the veteran staff of the companies and public administrations involved.

YEP MED is still in its initial phase. We have great challenges ahead of us, but we are excited and eager to create useful for vocational training for students; beautiful in its design and conception. At the end we all want to feel proud to have been able to participate in its implementation, and to ensure that the project and its programmes continue to innovate well after the project reaches its completion in 26 months time. 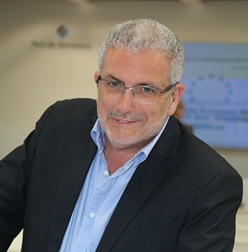